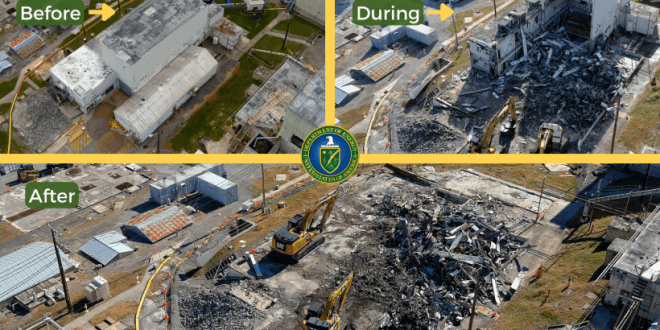 The beginning, middle and end: An aerial look at the progress of the teardown of the Bulk Shielding Reactor in the central campus of Oak Ridge National Laboratory from start to finish. EM Oak Ridge crews have safely completed the demolition ahead of schedule, reducing risks at the laboratory and opening land for reuse at the site. (Photo: UCOR)

The Oak Ridge Office of Environmental Management (OREM) announced this week that crews recently completed the first-ever demolition of a reactor in the central campus area at the Oak Ridge National Laboratory (ORNL).

The Bulk Shielding Reactor complex was built in the 1950s for radiation shielding studies as part of the federal Aircraft Nuclear Propulsion Program. It included a 27-foot-deep reactor pool filled with water to shield the radioactive components contained in the pool. Its mission changed to a general-purpose research reactor in 1963 and was shut down permanently in 1991.

According to the announcement, work continues at the reactor site to finish reducing the size of debris from the teardown and haul debris to a disposal facility. Workers will complete packaging and disposal of the 250 truckloads of waste and debris generated by this project by the end of November.

One of the most important pre-demolition activities, according to UCOR, involved removing and disposing irradiated components from the reactor pool. After those tasks, workers drained the 130,000 gallons of the water from the pool and sent it to an onsite treatment facility. Then the pool area was decontaminated and filled with a concrete mixture to close it.

In addition to stabilizing the reactor pool, UCOR workers removed asbestos and other waste from the facility.

The Bulk Shielding Reactor was one of more than a dozen research reactors constructed at ORNL over multiple decades and was one of 16 inactive research reactors and isotope facilities EM is addressing at ORNL. Crews are continuing deactivation and demolition preparations at the adjacent Low Intensity Test Reactor and Oak Ridge Research Reactor. Both are slated for near-term demolition, according to UCOR.

Jim Harris has been WYSH's News & Sports Director since 2000. In addition to reporting local news, he is the play-by-play voice for Clinton High School football, boys' and girls' basketball and baseball. Catch Jim live weekdays beginning at 6:30 am for live local news, sports, weather and traffic plus the Community Bulletin Board, shenanigans with Ron Meredith and more on the Country Club Morning Show on WYSH. Jim lives in Clinton with his wife Kelly and daughter Carolina, and cats Oliver, Bow and Libby.
Previous SHI: TBI best in nation at combating child, youth sex trafficking
Next Grand opening set for disc golf course at Carden Farm