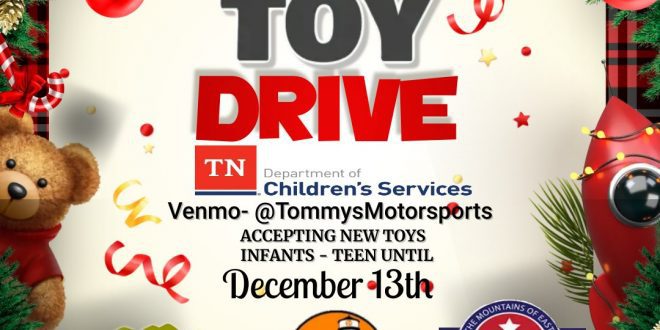 Tommy’s Motorsports has announced that its 4th Annual Toy drive is in full swing.
Donated toys will go to kids in Anderson County who are under the care of the Department of Children’s Services (DCS). Last year, according to organizers, enough donations were collected to provide Christmas for almost 400 kids who otherwise may not have received gifts.
Organizers ask that you donate new toys for ages infant thru teenager. They have also set up a Venmo link you can use to send a monetary donation or can give you a Paypal link if you prefer. The deadline for donations will be December 13th.
Donation boxes are located at the Tommy’s Motorsports in Clinton, Windrock Park, Anderson County Mayor Terry Frank’s Office, and at Clinton City Hall.

In its announcement, Tommy’s Motorsports says that anyone who brings a toy to their Clinton store will get 10% off parts during the toy drive.

Jim Harris has been WYSH's News & Sports Director since 2000. In addition to reporting local news, he is the play-by-play voice for Clinton High School football, boys' and girls' basketball and baseball. Catch Jim live weekdays beginning at 6:30 am for live local news, sports, weather and traffic plus the Community Bulletin Board, shenanigans with Ron Meredith and more on the Country Club Morning Show on WYSH. Jim lives in Clinton with his wife Kelly and daughter Carolina, and cats Oliver, Bow and Libby.
Previous Oak Ridge announces Thanksgiving closures, changes
Next Rescue Squad announces door-to-door fundraiser