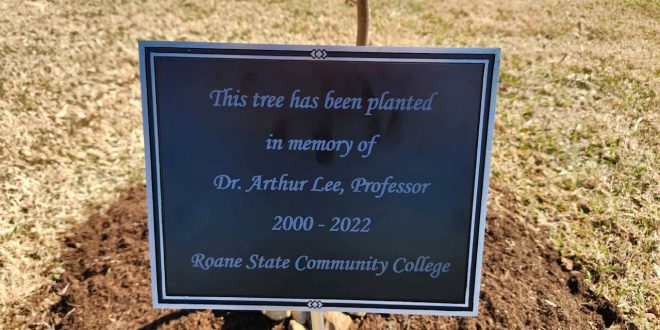 (By Bob Fowler, Roane State staff writer) Years from now, a stately tulip poplar on a small knoll on Roane State’s Oak Ridge campus will serve as a symbol of a beloved professor’s legacy.

The sapling in front of the Coffey/McNally Building was recently planted by faculty members in memory of Dr. Arthur Lee, who tragically died in February.

Lee had been a popular instructor and a member of the community college’s faculty for 21 years. He was “one of the smartest people I’ve ever known,” Roane State President Chris Whaley said during a brief ceremony.

“He loved interacting with his students,” said Dr. Sylvia Pastor. Lee was her mentor in the process of securing tenure, said Pastor, an assistant professor.

Pastor and Lee launched the “Lab-in-a-Box” program where middle school students are given containers full of scientific components that help make learning more hands-on. Twenty-seven middle schools in the area now have all three kits.

Assistant Professor Connie Blalock recalled her new office was next-door to Lee’s on the second floor of the Goff Health Sciences and Technology Building, and he was the first faculty member to welcome her. “He always had a smile on his face,” Blalock said. “I miss him a lot.”

Associate Professor Ted Stryk said he and Lee would discuss numerous topics. “He really made me feel I was part of this college,” Stryk said. “He was extremely knowledgeable but also not intimidating.”

A recording of the tree planting ceremony is available to watch on Roane State’s YouTube channel at youtube.com/roanestatecc under the videos section.

Earlier this year, the college established the Arthur Lee Memorial Fund which will be used to provide an annual scholarship to a Roane State student.

Donations to the new scholarship may be made online at roanestate.edu/lee or mailed to Roane State Foundation, 276 Patton Lane, Harriman, TN 37748.

Jim Harris has been WYSH's News & Sports Director since 2000. In addition to reporting local news, he is the play-by-play voice for Clinton High School football, boys' and girls' basketball and baseball. Catch Jim live weekdays beginning at 6:30 am for live local news, sports, weather and traffic plus the Community Bulletin Board, shenanigans with Ron Meredith and more on the Country Club Morning Show on WYSH. Jim lives in Clinton with his wife Kelly and daughter Carolina, and cats Oliver, Bow and Libby.
Previous Repair work begins on bridges across GSMNP
Next Oak Ridge announces Thanksgiving closures, changes