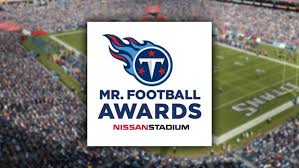 Maverick QB Martinez named a Finalist for 4A Mr. Football

Anderson County High School quarterback Walker Martinez is one of three finalists for the Tennessee Titans Mr. Football Award in the TSSAA’s Division 1, Class 4A.

Martinez has led his Mavericks to a 13-0 record and the school’s first trip to the state semifinals since 1996. To advance to Friday’s game at 11-2 Red Bank, Anderson County had to beat both of the teams that had ended previous postseason runs—Elizabethton and Greeneville—in back-to-back weeks. For the season, Martinez has completed 74% of his passes for 3684 yards, 50 touchdowns and only six interceptions. He was recently named as MaxPrep’s overall Player of the Year in Tennessee. In addition, Martinez has been recognized as player of the week 6 times this season by 5-Star Preps, Knox Preps, WVLT, WVLT and WBIR, as well as being recognized as player of the week by the Knoxville Quarterback Club.

The Tennessee Titans Mr. Football Awards will be presented to the top football players in nine classifications of the Tennessee Secondary School Athletic Association on Wednesday, December 7, 2022, at Nissan Stadium in Nashville. The top kicker in the state will be recognized with a Mr. Football Award, regardless of classification. The three finalists in each category were announced by Mike Keith and Titans head coach Mike Vrabel in a live video stream.

A committee of statewide sports writers selected winners based on performance in the 2022 regular season. Academics and character were also taken into consideration. High school head coaches and members of the media nominated the finalists.

Jim Harris has been WYSH's News & Sports Director since 2000. In addition to reporting local news, he is the play-by-play voice for Clinton High School football, boys' and girls' basketball and baseball. Catch Jim live weekdays beginning at 6:30 am for live local news, sports, weather and traffic plus the Community Bulletin Board, shenanigans with Ron Meredith and more on the Country Club Morning Show on WYSH. Jim lives in Clinton with his wife Kelly and daughter Carolina, and cats Oliver, Bow and Libby.
Previous Rita Annette Schuler, 66, of Knoxville
Next ACSO: Man arrested after armed robbery