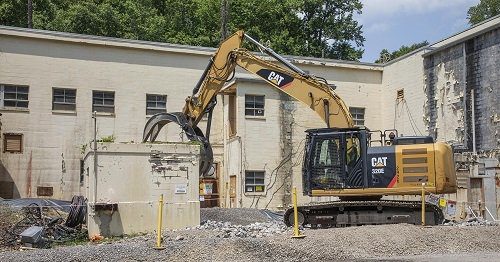 They successfully completed the demolition of the former Criticality Experiment Laboratory after working this past summer to bring down the dilapidated 1940s-era facility, also known as Building 9213.

“Removal of this facility is another sign of our steady progress transforming DOE’s Oak Ridge Reservation,” said Laura Wilkerson, acting manager for DOE’s Oak Ridge Office of EM in a UCOR announcement of the milestone.

More than 50 percent of the facilities throughout the National Nuclear Security Administration complex, which includes Y-12, are more than 40 years old, according to UCOR, and the Criticality Experiment Laboratory is one of them.

Built in 1949, the two-story, 24,000-square-foot laboratory was used to conduct experiments with fissile uranium isotopes for nuclear reactor designs. Employees performed more than 9,700 experiments there in its first decade, and the facility later supported the Oak Ridge National Laboratory’s High Flux Isotope Reactor program. The building has been closed since 1992.

With the building down, crews are working to remove waste and debris. They expect to move an estimated 525 truckloads of it in coming weeks.

Workers spent significant time deactivating the facility leading up to its teardown. They removed nearly 1,500 linear feet of asbestos-insulated piping, 300 linear feet of process piping and 8,500 square feet of other asbestos-containing material.

“Our team continues to complete this mission-critical work in the safest possible manner. In a recent survey, our workers shared that doing this work to clean up the environment for the future keeps them motivated,” said UCOR President and CEO Ken Rueter. “They think it is important and rewarding, and so do I. We are proud of our part in advancing the science and national security missions performed here in Oak Ridge.”

Jim Harris has been WYSH's News & Sports Director since 2000. In addition to reporting local news, he is the play-by-play voice for Clinton High School football, boys' and girls' basketball and baseball. Catch Jim live weekdays beginning at 6:30 am for live local news, sports, weather and traffic plus the Community Bulletin Board, shenanigans with Ron Meredith and more on the Country Club Morning Show on WYSH. Jim lives in Clinton with his wife Kelly and daughter Carolina, and cats Oliver, Bow and Libby.
Previous THSO Traffic Safety grants announced
Next Roane State announces workforce training partnership with IACMI as part of ‘America’s Cutting Edge’