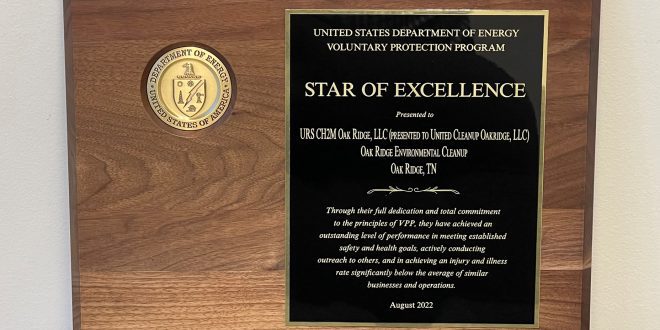 UCOR recognized by DOE for safety

The contractor in charge of environmental cleanup in Oak Ridge, United Cleanup Oak Ridge (UCOR) has again been recognized with the Department of Energy’s (DOE) Voluntary Protection Program’s (VPP) Star of Excellence. UCOR has previously achieved the Star of Excellence four successive years (2017–2020), which led to the company’s Legacy of Stars award in 2020.

According to a press release announcing the award, at UCOR, safety is the “top company value,” with a deep commitment from leadership and frontline workers alike. The company, which started a new contract for environmental cleanup in May, continues to maintain the same award-winning safety culture that the company developed under its previous 11-year contract.

The Star of Excellence was awarded at a DOE VPP Workshop held in conjunction with the 2022 Voluntary Protection Program Participants’ Association (VPPPA) Safety+ Symposium in Washington, D.C. The Star of Excellence recognizes UCOR’s outstanding level of performance in meeting established safety and health goals, actively conducting outreach to others, and in achieving an injury and illness rate that is at least 75% below the average of similar businesses and operations.

UCOR was also awarded a VPPPA 2022 Safety Innovation Award at the Symposium. The award recognized UCOR’s new digital interface for reporting safety observations that has greatly increased the number of observation submittals.

UCOR is a partnership between Amentum, Jacobs, and Honeywell.

The company’s nearly 2,000 workers are dedicated to safely reducing environmental risk on the Oak Ridge Reservation while helping DOE’s Office of Science and the National Nuclear Security Administration continue their important missions. Learn more about the company at www.UCOR.com.

Jim Harris has been WYSH's News & Sports Director since 2000. In addition to reporting local news, he is the play-by-play voice for Clinton High School football, boys' and girls' basketball and baseball. Catch Jim live weekdays beginning at 6:30 am for live local news, sports, weather and traffic plus the Community Bulletin Board, shenanigans with Ron Meredith and more on the Country Club Morning Show on WYSH. Jim lives in Clinton with his wife Kelly and daughter Carolina, and cats Oliver, Bow and Libby.
Previous Stagnolia tapped to be Caryville’s next top cop
Next HSFB polls after week 4