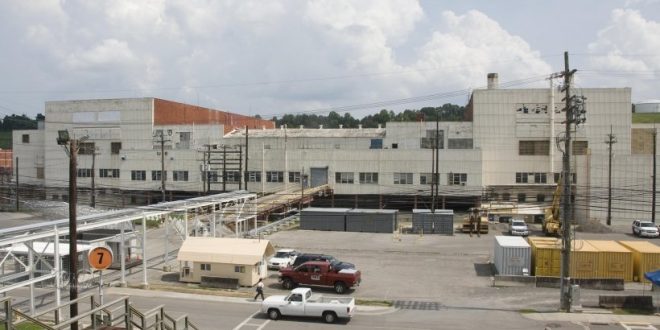 A view of the Alpha-4 facility at the Y-12 National Security Complex at Oak Ridge. EM crews are in the early stages of removing all utility sources to the building prior to tearing down the facility. (Photo by UCOR)

UCOR has announced that Environmental Management crews in Oak Ridge are taking the first steps to bring the massive Alpha-4 facility at the Y-12 National Security Complex (Y-12) to the “cold-and-dark stage,” a process in which they remove all utility sources to the building as a precursor to demolition.

This project moves OREM closer to addressing one of the largest high-risk buildings at the site. It also marks the third former enrichment facility at Y-12 where EM has initiated deactivation work. Other crews are preparing the Alpha-2 and Beta-1 facilities for teardown.

The federal contractor leading the cleanup of the facilities in Oak Ridge, UCOR, began sampling and marking potential hazards and removing combustible materials from Alpha-4 last month, according to a press release. Workers will soon begin isolating the structure from any potential hazardous energy sources, an early step in the deactivation process.

“Our close integration with Y-12 and its prime contractor, Consolidated Nuclear Security, coupled with integrating our deactivation and demolition work across the entire Oak Ridge Reservation is key to keeping our work moving forward,” said Dan Macias, UCOR’s site integration and cleanup manager. “Our workforce’s commitment to doing this work in the safest possible way helps us ensure we meet DOE’s expectations to reduce risk and support Y-12’s ability to advance their national security mission.”

The four-story Alpha-4 spans more than 500,000 square feet across 13 acre of land. The deactivation and demolition project is challenging not only due to the facility’s size, but also its mercury contamination.

The facility was used for uranium separation from 1944 to 1945. A decade later, workers finished installing Column Exchange (COLEX) equipment on the west, east, and south sides of Alpha-4 for lithium separation, a process requiring large amounts of mercury.

A significant amount of mercury was lost into the equipment, building and surrounding soils during those operations. Mercury cleanup is one of EM’s top priorities at Y-12.

Although employees drained the majority of materials from the equipment at Alpha-4 when operations ended in the 1960s, recoverable amounts of mercury remained in aging lines and equipment that had rusted and deteriorated over the decades.

Two other pivotal projects are underway that will enable removal of Alpha-4. The first is construction of the Mercury Treatment Facility. The facility will capture and treat mercury releases entering a nearby creek caused by crews and big machinery tearing down Alpha-4 and other large, mercury-contaminated buildings in the area.

Other critical work is the National Nuclear Security Administration’s West End Protected Area Reduction Project. That effort is rerouting portions of the high-security area at Y-12 around Alpha-4 and the other mercury-contaminated buildings, allowing enhanced access for cleanup crews and significantly reducing cleanup costs.

Deactivation work at Alpha-4 is expected to continue for several years, according to the UCOR announcement.

Jim Harris has been WYSH's News & Sports Director since 2000. In addition to reporting local news, he is the play-by-play voice for Clinton High School football, boys' and girls' basketball and baseball. Catch Jim live weekdays beginning at 6:30 am for live local news, sports, weather and traffic plus the Community Bulletin Board, shenanigans with Ron Meredith and more on the Country Club Morning Show on WYSH. Jim lives in Clinton with his wife Kelly and daughter Carolina, and cats Oliver, Bow and Libby.
Previous Have a little fall fun in Claxton on Saturday
Next NTSB releases initial report in fatal August plane crash