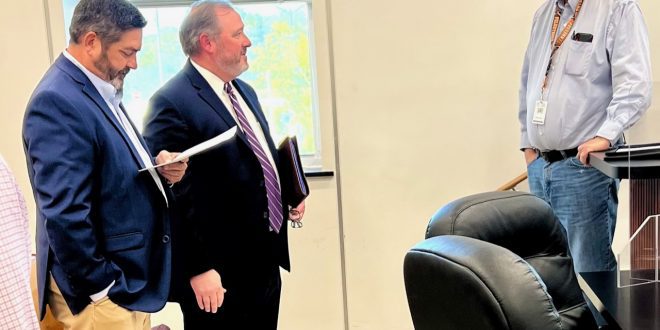 Anderson County government leaders were notified last week that the Tennessee Department of Environment and Conservation (TDEC) has committed to cleaning up the former site of the American Nuclear Corporation off of Blockhouse Valley Road in South Clinton.

TDEC Deputy Commissioner Greg Young and Director of Remediation Steve Sanders made that announcement during a workshop last week with members of the Anderson County Commission and County Mayor Terry Frank, as well as representatives from Congressman Chuck Fleischmann’s office.

According to information provided by the County Mayor’s Office, the American Nuclear Corporation (ANC) site’s history dates back to an incident that occurred on February 20, 1969, when “significant and unacceptable” levels of radioactivity were detected in water samples collected from a nearby river during quarterly water sampling by the Oak Ridge National Laboratory. During its brief existence, the county says that the company was “repeatedly” cited for not complying with state and federal regulations concerning the handling of radioactive materials. Some cleanup at the site began in 1974, and the state of Tennessee took control of the property in 1980.

According to a county press release, TDEC conducted a review of the ANC timeline and paid a site visit in September of 2021 and reached out to their regulatory partners at the federal Environmental Protection Agency (EPA). Due to bureaucratic hurdles and legal questions, the EPA did not perform its initial screening at the American Nuclear site until earlier this month. EPA teams were on-site for about three-and-a-half days last week, according to the county. The EPA will conduct sampling across the entire site and TDEC will review the results.

The EPA and TDEC will then identify the equipment and resources needed to remediate the site. Officials say that the initial survey information will “inform the larger evaluation to occur as soon as possible based on the availability of external resources (i.e., equipment) that will be needed.”

According to Young and Sanders, the General Assembly included approximately $22 million in this year’s state budget for TDEC to remediate eligible sites and projects across Tennessee.

According to the county, once the sampling is completed and the equipment needs for the ANC site are finalized, there will be three (3)potential paths forward:

“We were very excited about hosting Deputy Commissioner Young and Director of Remediation Sanders for a workshop with Anderson County,” County Mayor Terry Frank said in the press release. “The news they gave us for clean-up of the American Nuclear Corp. site was far more than I could have hoped for. We are thankful to the EPA, to Governor Lee, the General Assembly, and TDEC for the progress so far, and we look forward to a continued partnership with TDEC on this exciting project. This advancement is the result of a great working relationship with TDEC and Anderson County, and we look forward to accomplishing great things.”

“I think the news from TDEC was better than what we could have hoped for,” County Commission Chairman Josh Anderson agreed. “The only thing that’s kind of unknown is whether the EPA will fund it (the cleanup) federally or will it be the State. I appreciate Mayor Frank getting everybody in the same room together. That’s been a long time coming,” Anderson said.

“I was thoroughly impressed with the state’s presentation and I’m very excited about the news from TDEC,” said District 1 County Commissioner Tracy Wandell, whose district includes the American Nuclear site. “I’m looking forward to the future and next steps.”

Tyler Mayes, newly elected District 1 county commissioner, said: “TDEC’s announcement is a huge answered prayer for the people of District One and Anderson County. Hard work and perseverance by our former and current leaders have brought us to this point.”

We will continue to follow this story for you here on WYSH.

Jim Harris has been WYSH's News & Sports Director since 2000. In addition to reporting local news, he is the play-by-play voice for Clinton High School football, boys' and girls' basketball and baseball. Catch Jim live weekdays beginning at 6:30 am for live local news, sports, weather and traffic plus the Community Bulletin Board, shenanigans with Ron Meredith and more on the Country Club Morning Show on WYSH. Jim lives in Clinton with his wife Kelly and daughter Carolina, and cats Oliver, Bow and Libby.
Previous Couple arrested on car theft charges after 4-county manhunt
Next Adalbert “Mickey” Silva, age 88