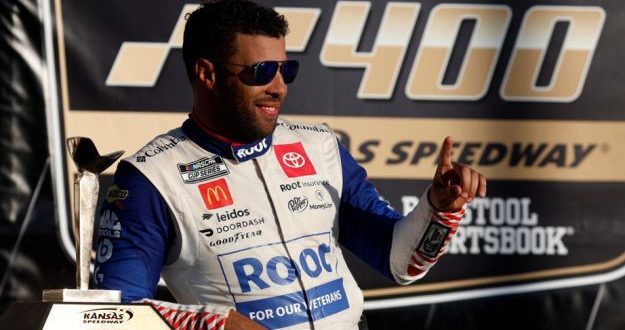 Photo by Getty Images, from NASCAR.com

(Reid Spencer, NASCAR Wire Service/MRN.com) Driving the same car number that carried teammate Kurt Busch to victory in the May race at Kansas Speedway, Bubba Wallace claimed a dramatic win at the same track in Sunday‘s Hollywood Casino 400, the second event in the first round of the NASCAR Cup Series Playoffs.

Wallace regained the lead on Lap 225 after the final cycle of green-flag pit stops at the 1.5-mile track and stayed out front for the final 43 circuits as his car owner, Denny Hamlin, chased him to no avail.

Wallace is competing for the Cup Series owners‘ championship in the car Kurt Busch drove for the first 20 races of the season before suffering lingering symptoms from a concussion after a wreck in qualifying at Pocono. With his win, Wallace qualified for the next round in the owners‘ competition.

Christopher Bell, who ran third, is the first driver to lock himself into the Playoffs‘ Round of 12 on points. The other 15 championship contenders will have to establish their positions in the final 12 — or suffer elimination — next Saturday night at Bristol Motor Speedway.

For a complete recap of Sunday’s race, follow this link.

(Reid Spencer, NASCAR Wire Service/MRN.com) In what is turning out to be a banner season for Noah Gragson, the driver of the No. 9 JR Motorsports Chevrolet scored his fifth NASCAR Xfinity Series victory of the year in Saturday‘s rain-shortened Kansas Lottery 300 at Kansas Speedway.

Gragson charged from sixth in the running order past cars on older tires — and past the dominant Toyota of Ty Gibbs — to grab the lead after a restart on Lap 76.

A light rain interrupted the proceedings on Lap 82, but Gragson held the top spot in a two-lap shootout at the end of Stage 2. When rain began to fall harder and drenched the track, NASCAR red-flagged the race on Lap 94 and subsequently declared Gragson the winner.

The victory was Gragson‘s second straight, his first at Kansas — the only active Xfinity Series track where he had previously failed to record a top 10 — and the 10th of his career.

At the end of a dominant evening, Nemechek had the race victory and two stage wins to go with the pole he had won earlier in the afternoon.

All Hocevar had was a fourth career runner-up finish and a pink slip where the 2022 Truck Series Playoffs are concerned.

The Camping World Truck Series’ next race is the UNOH 200, scheduled Thursday (9 p.m. ET, FS1, PRN) at Bristol Motor Speedway. That event opens the three-race Round of 8, the next set of races in the postseason.

Jim Harris has been WYSH's News & Sports Director since 2000. In addition to reporting local news, he is the play-by-play voice for Clinton High School football, boys' and girls' basketball and baseball. Catch Jim live weekdays beginning at 6:30 am for live local news, sports, weather and traffic plus the Community Bulletin Board, shenanigans with Ron Meredith and more on the Country Club Morning Show on WYSH. Jim lives in Clinton with his wife Kelly and daughter Carolina, and cats Oliver, Bow and Libby.
Previous Single lane closures this week, next on Spur
Next Dragons take care of business, roll Chiefs