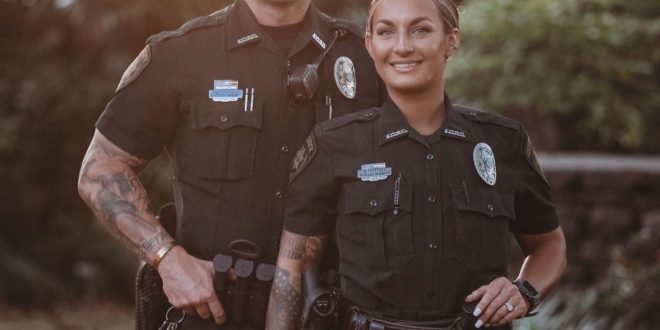 We have some very good news to pass along to you today, as over the weekend, injured Anderson County Reserve Sheriff’s Deputy Lucas Shoffner was released from the Trauma ICU at UT Medical Center, where he had spent 40 days after sustaining serious injuries in an incident that occurred on August 1st.

The Shoffners—Lucas and wife and fellow reserve ACSO Deputy Nicole–had been working to reattach a chain to a small motorcycle by the side of the road in Campbell County on August 1st when they were hit by a pickup truck driven by an off-duty Campbell County Sheriff’s deputy.

Lucas pushed Nicole out of the way and took the brunt of the impact, resulting in multiple fractures. He had been at UT Medical Center since the accident, where at one point, he required surgery to relieve swelling around his brain. Nicole, who was also injured, posted the update that he was being released from ICU on her Instagram account over the weekend.

Lucas Shoffner is being transferred to a rehab facility in Atlanta, and while he still has a long road to recovery left to travel, he and his wife are grateful for the support they have received from not just the law enforcement community, but from the community as a whole.

A GoFundMe account has been created in order to raise money for the Shoffners as they both work to recover and move on from the accident that has upended their lives.

Jim Harris has been WYSH's News & Sports Director since 2000. In addition to reporting local news, he is the play-by-play voice for Clinton High School football, boys' and girls' basketball and baseball. Catch Jim live weekdays beginning at 6:30 am for live local news, sports, weather and traffic plus the Community Bulletin Board, shenanigans with Ron Meredith and more on the Country Club Morning Show on WYSH. Jim lives in Clinton with his wife Kelly and daughter Carolina, and cats Oliver, Bow and Libby.
Previous TN State Parks, TN First lady team up to offer volunteer opportunities
Next Country star John Michael Montgomery injured in Campbell bus crash