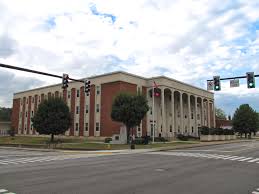 This morning during a ceremony in the Circuit Courtroom on the third floor of the Anderson County Courthouse, new and returning elected county officials, and in the cases of some, members of their staffs, were sworn into their respective offices.

The ceremony was streamed live on ACTV and will be available to view on demand if you were not able to watch it live.

The list of people sworn in this morning includes two new General Sessions Court judges, Victoria Bowling in Division I and Matt Tuck in Division II, both of whom were immediately pressed into service as they rotated with the county’s three other judges to conduct the rest of the ceremony.

Elected officials were not the only ones sworn in today. Staff members in fee offices like the Circuit Court Clerk, the County Clerk, and Trustee all took an oath of office, as did deputy clerks in Circuit Court, General Sessions Court, Chancery Court and Juvenile Court.

Following the swearing-in ceremony, the new-look Anderson County Commission held a special called meeting to select a new Chair and Vice Chair. Josh Anderson will serve one more year as the Commission Chairman, and Shain Vowell was re-elected as Vice Chairman. Robert McKamey was selected to serve another term as Parliamentarian.

Due to the swearing-in ceremony, most county offices in the Courthouse did not open until late morning.

Jim Harris has been WYSH's News & Sports Director since 2000. In addition to reporting local news, he is the play-by-play voice for Clinton High School football, boys' and girls' basketball and baseball. Catch Jim live weekdays beginning at 6:30 am for live local news, sports, weather and traffic plus the Community Bulletin Board, shenanigans with Ron Meredith and more on the Country Club Morning Show on WYSH. Jim lives in Clinton with his wife Kelly and daughter Carolina, and cats Oliver, Bow and Libby.
Previous Sec’y of State leads Tennessee voter registration efforts during ‘National Voter Registration Month’
Next Norma Guinn Walker, 81, of Andersonville