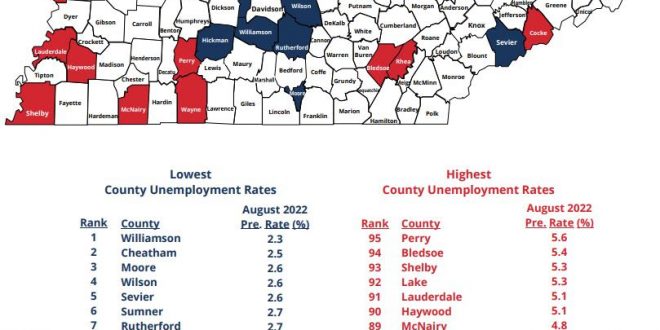 (TDLWD/staff reports) Every county in Tennessee experienced lower unemployment rates in August, according to information released Thursday by the state’s Department of Labor and Workforce Development. For the month, 89 counties recorded rates below 5%, while the remaining six counties came in with rates higher than 5%, but less than 10%.
Williamson County’s unemployment rate was the lowest in Tennessee during August. At 2.3%, the county’s rate dropped by 0.3 of a percentage point from its July figure of 2.6%.
Perry County recorded the state’s highest jobless number for the month at 5.6%. Its new rate accounted for a 0.7 of a percentage point drop from its July rate of 6.3%.

Jim Harris has been WYSH's News & Sports Director since 2000. In addition to reporting local news, he is the play-by-play voice for Clinton High School football, boys' and girls' basketball and baseball. Catch Jim live weekdays beginning at 6:30 am for live local news, sports, weather and traffic plus the Community Bulletin Board, shenanigans with Ron Meredith and more on the Country Club Morning Show on WYSH. Jim lives in Clinton with his wife Kelly and daughter Carolina, and cats Oliver, Bow and Libby.
Previous Louie Bluie Festival returns to Cove Lake State Park Saturday
Next THP: Cyclist killed by vehicle Wednesday night