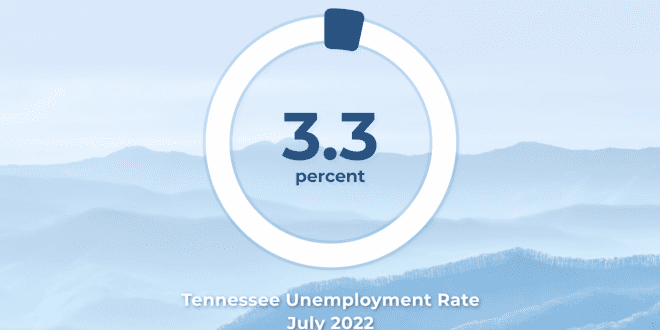 (TDLWD) Tennessee’s seasonally adjusted statewide unemployment rate remained unchanged for July 2022, according to newly released data from the Department of Labor and Workforce Development (TDLWD). For the third consecutive month, the rate has held steady at 3.3%.

The state’s July rate is just 0.1 of a percentage point higher than the all-time low unemployment rate of 3.2% which was recorded in both March and April of this year.

Between July 2021 and July 2022, Tennessee employers added 110,000 new nonfarm jobs to their payrolls. The leisure and hospitality sector saw the biggest year-to-year gains. The trade, transportation, and utilities sector and the mining, logging, and construction sector saw the next highest employment increases.

In a month-to-month comparison, there were 12,400 fewer nonfarm jobs across the state in July. The local government sector accounted for the largest number of jobs lost, followed by the durable goods manufacturing sector and the mining and logging sector.

Tennessee’s seasonally adjusted civilian workforce contracted slightly in July, down 0.1% to 3,409,628 people. That 2022 figure still came in 2.3% higher than the number of individuals working across the state during the month last year.

Nationally, seasonally adjusted unemployment dropped slightly between June and July, down 0.1 of a percentage point to 3.5%.

Jim Harris has been WYSH's News & Sports Director since 2000. In addition to reporting local news, he is the play-by-play voice for Clinton High School football, boys' and girls' basketball and baseball. Catch Jim live weekdays beginning at 6:30 am for live local news, sports, weather and traffic plus the Community Bulletin Board, shenanigans with Ron Meredith and more on the Country Club Morning Show on WYSH. Jim lives in Clinton with his wife Kelly and daughter Carolina, and cats Oliver, Bow and Libby.
Previous Harriman fugitive apprehended in Illinois
Next Roberta Campbell Wright, 78, of Oliver Springs