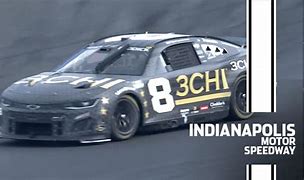 Tyler Reddick survived a wild overtime battle against Ross Chastain — who, as it turned out, was under penalty for finagling the first corner — to win Sunday’s Verizon 200 at the Brickyard.

Reddick’s NASCAR Cup Series victory at the 2.439-mile, 14-turn Indianapolis Motor Speedway Road Course was his second this month, the second of his career and his second at a road course.

Follow this link for a complete recap of Sunday’s race.

With his victory in Saturday’s Pennzoil 150 at the Brickyard, the driver of the No. 16 Kaulig Racing Chevrolet is the undisputed King of the Road.

Allmendinger was an irresistible force at the 2.439-mile, 14-turn Indianapolis Motor Speedway Road Course. He led 42 of the 62 laps and overcame a fraught 25-second pit stop that dropped him from the lead to 13th for a restart on Lap 19.

The victory was Allmendinger’s third of the season — all on road courses — and his fourth win in the last five Xfinity Series races on circuits that turn right as well as left, dating to his triumph in last year’s fall event at the Charlotte Roval.

Allmendinger passed runner-up Alex Bowman for the lead after a restart on Lap 45, staying alongside Bowman’s No. 17 Chevrolet through Turn 1 and pulling clear through Turn 2. Allmendinger crossed the finish line 2.084 seconds ahead of the Hendrick Motorsports driver.

For more on Saturday’s race, follow this link to NASCAR.com.

Charging to the front on fresh tires after the TSport 200 went to overtime on Friday night, Enfinger passed Zane Smith for the lead on Lap 206 of 207 and went on to win the first event in the 2022 NASCAR Camping World Truck Series Playoffs.

In the return of the series to Lucas Oil Indianapolis Raceway Park for the first time since 2011, Enfinger beat runner-up Ben Rhodes to the finish line by 0.477. Rhodes passed Smith on the final lap to secure the second spot.

With his first victory since 2020 and the seventh of his career, Enfinger gained automatic advancement to the second round of the playoffs after a regular season that saw a lackluster performance by his GMS Racing team and a reunion with veteran crew chief Jeff Hensley before the July 9 race at Mid-Ohio Sports Car Course.

Zane Smith held third in a finish that was not without controversy. The playoff’s top seed entering the race, Smith had crowded Chandler Smith into the outside wall earlier in the event, damaging both trucks.

For a recap of Friday’s race and more, follow this link,

Jim Harris has been WYSH's News & Sports Director since 2000. In addition to reporting local news, he is the play-by-play voice for Clinton High School football, boys' and girls' basketball and baseball. Catch Jim live weekdays beginning at 6:30 am for live local news, sports, weather and traffic plus the Community Bulletin Board, shenanigans with Ron Meredith and more on the Country Club Morning Show on WYSH. Jim lives in Clinton with his wife Kelly and daughter Carolina, and cats Oliver, Bow and Libby.
Previous LaFollette Council to vote on new chief of police
Next ‘Coffee With a Cop’ returns August 17th