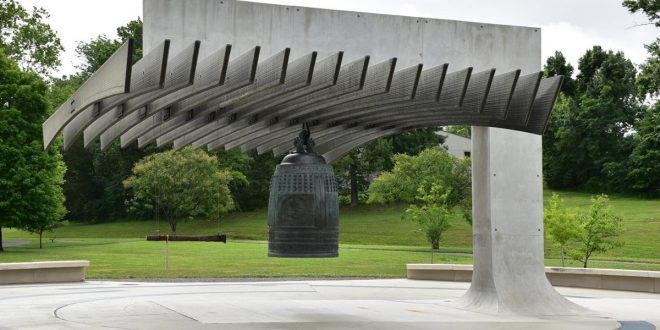 MPNHP to commemorate 77 years since first atomic bombs were dropped

The Manhattan Project National Historical Park will host a peace ceremony in Oak Ridge on Saturday to mark 77 years since the world’s first atomic bombs were dropped, the first on Hiroshima, Japan on August 6th, 1945, and the second on Nagasaki three days later.

On August 6th, beginning at 6:47 am, the National Park Service will host a sunrise ceremony in Oak Ridge at the International Friendship Bell and Peace Pavillion in A.K. Bissell Park.

The ceremony will feature music from an Oak Ridge Civic Music Association quartet and allow for quiet, somber reflection.

An hour before dawn, park rangers will light luminarias decorated with messages of peace by community members.

Manhattan Project National Historical Park will ring the International Friendship Bell at dawn 77 times to commemorate the effects of the atomic bombing of Hiroshima. During this silent event, organizers will be requesting visitors to come up and ring the bell. Visitors will be able to write down their own hopes and messages of peace.

The International Friendship Bell is a symbol of unity and carries the message of peace and international friendship into the future, according to the National Park Service. At nearly seven feet tall and five feet wide, this 8,300-pound bronze bell hangs at Bissell Park in Oak Ridge, where the uranium for the world’s first atomic weapons was manufactured. Designed in Oak Ridge and cast in Kyoto, Japan, the relief panels on the bell show peaceful imagery inspired by Tennessee, Japan, and the tragedies of war between the two nations. The International Friendship Bell and Peace Pavilion were dedicated more than 25 years ago to symbolize “the strides for peace and reconciliation between Japan and the United States,” according to the Atomic Heritage Foundation.

Of course, Oak Ridge was one of three top-secret sites involved in the Manhattan Project that culminated with the development of the first atomic bombs. Personnel at the Oak Ridge facilities were in charge of enriching uranium under absolute secrecy, while crews at a factory in Hanford, Washington made the plutonium, and both sites then sent those materials to a lab in Los Alamos, New Mexico, where the first atomic weapons were assembled.

The bombings of Hiroshima and Nagasaki, which helped bring about the end of World War II.

Jim Harris has been WYSH's News & Sports Director since 2000. In addition to reporting local news, he is the play-by-play voice for Clinton High School football, boys' and girls' basketball and baseball. Catch Jim live weekdays beginning at 6:30 am for live local news, sports, weather and traffic plus the Community Bulletin Board, shenanigans with Ron Meredith and more on the Country Club Morning Show on WYSH. Jim lives in Clinton with his wife Kelly and daughter Carolina, and cats Oliver, Bow and Libby.
Previous Summer camp offered through Roane State helps students hone cybersecurity skills
Next LaFollette Council votes to have Wallen succeed Roehl