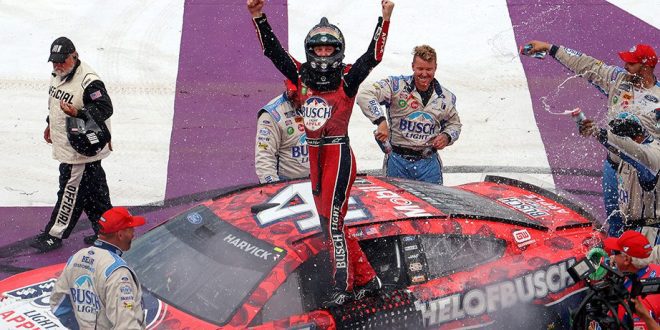 (Reid Spencer, NASCAR Wire Service) On a blustery Sunday in the Irish Hills of Michigan, Kevin Harvick saved his season.

Grabbing the lead and pulling away after a restart on Lap 166 of 200 at Michigan International Speedway, Harvick won the FireKeepers Casino 400 by 2.903 seconds over pole winner Bubba Wallace and leap-frogged bubble-riding Martin Truex Jr. in the NASCAR Cup Series Playoff standings.

Harvick’s victory ended a 65-race drought for the 46-year-old former series champion from Bakersfield, California. The win was his sixth at Michigan and his fifth in the last seven races at the 2-mile track.

Harvick now has 59 victories in the series, 10th-most all-time. With the win, the eighth straight at the track for Ford drivers, he is likely to qualify for the NASCAR Cup Series Playoff. Harvick is the only driver to have earned a postseason spot every year since the current elimination format was introduced in 2014, the same year he won his series title.

Harvick remained on the lead lap and inherited the top spot when the contending cars ahead of him pitted under the yellow. With Wallace bottled up behind Joey Logano’s Ford after the Lap 166 restart, Harvick opened a gap of more than four seconds in clean air and cruised to his first win since Sept. 19, 2020 at Bristol.

Denny Hamlin finished third in arguably the fastest car in the race. On his final pit stop under caution on Lap 160, Hamlin incurred a penalty for too many men over the wall when his crew corralled a runaway tire from an adjacent pit stall.

Hamlin restarted 22nd and charged to third, 3.910 seconds behind the race winner.

The tenor of the race changed markedly near the end of the second stage when pole winner Noah Gragson opted to stay on the track and compete for the stage win on the high-speed 2-mile track.

Gibbs had pitted under caution on Lap 55 and inherited the lead when Gragson and others who had stayed out until the completion of the stage came to pit road during the stage break.

The race ran caution-free from the final restart Lap 68 to the finish on Lap 125, and Gibbs beat runner-up Justin Allgaier to the stripe by 1.160 seconds. Gragson worked his way up to third but trailed Gibbs by 2.472 seconds at the finish.

The victory was Gibbs’ first at Michigan and the ninth in 39 Xfinity Series starts for a remarkable winning percentage of 23.08.

For more on Saturday’s race, follow this link to NASCAR.com.

Jim Harris has been WYSH's News & Sports Director since 2000. In addition to reporting local news, he is the play-by-play voice for Clinton High School football, boys' and girls' basketball and baseball. Catch Jim live weekdays beginning at 6:30 am for live local news, sports, weather and traffic plus the Community Bulletin Board, shenanigans with Ron Meredith and more on the Country Club Morning Show on WYSH. Jim lives in Clinton with his wife Kelly and daughter Carolina, and cats Oliver, Bow and Libby.
Previous AC announces new Animal Care & Control Director
Next Clinton looks good in scrimmage vs. CAK