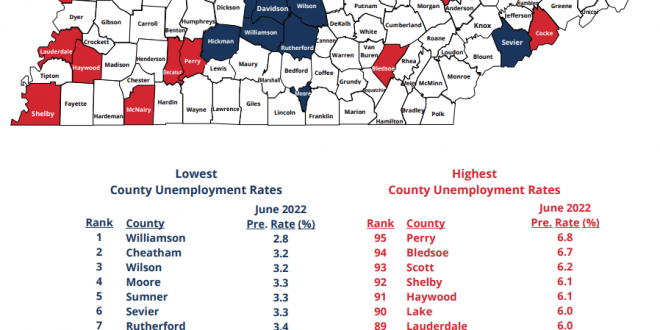 Unemployment up in all 95 TN counties, summer break cited as one reason why

Jim Harris July 29, 2022 Featured, Local News Comments Off on Unemployment up in all 95 TN counties, summer break cited as one reason why 391 Views

Unemployment increased in all 95 Tennessee counties last month, according to information released Thursday by the state’s Department of Labor and Workforce Development (TDLWD).

The department said that the county-by-county increases could be blamed, in part, on school employees on their yearly summer break, and that the latest statistics, as they typically do in June, reflected that.
Statewide, unemployment remained unchanged between May and June at 3.3%. And, while the state rate is adjusted to consider seasonal impacts, like school breaks, county unemployment data is not adjusted.
Across Tennessee, 68 counties had unemployment rates that were less than 5% in June. The remaining 27 counties had rates that came in at 5% or higher but less than 10%.

Williamson County recorded the state’s lowest rate for the month at 2.8%, which was a 0.5 of a percentage point increase.

Perry County’s rate was Tennessee’s highest in June. At 6.8%, unemployment there increased by 1.3 percentage points during the month.

Locally, Anderson County’s unemployment rate climbed by a full point, from 3.2% in May to 4.2% in June. In Campbell County, the increase was slightly higher, jumping 1.2 points from 4.0 to 5.2% last month. In Knox County, unemployment climbed by eight-tenths of a point to 3.6%, from 2.8% two months ago.

Morgan County’s unemployment rate went up by a point from 3.6% in May to 4.6% in June, Roane County’s jumped 1.1% to 4.6 from 3.5% and Union County saw a 1.2% increase in unemployment, reporting a 4.8% rate in June compared to May’s 3.6%.
TDLWD has a complete analysis of June’s county-by-county unemployment data, including labor force estimates for several of the state’s cities, which is available here.

Jim Harris has been WYSH's News & Sports Director since 2000. In addition to reporting local news, he is the play-by-play voice for Clinton High School football, boys' and girls' basketball and baseball. Catch Jim live weekdays beginning at 6:30 am for live local news, sports, weather and traffic plus the Community Bulletin Board, shenanigans with Ron Meredith and more on the Country Club Morning Show on WYSH. Jim lives in Clinton with his wife Kelly and daughter Carolina, and cats Oliver, Bow and Libby.
Previous School supply donation drives in Clinton, OR
Next Back-to-School time is upon us