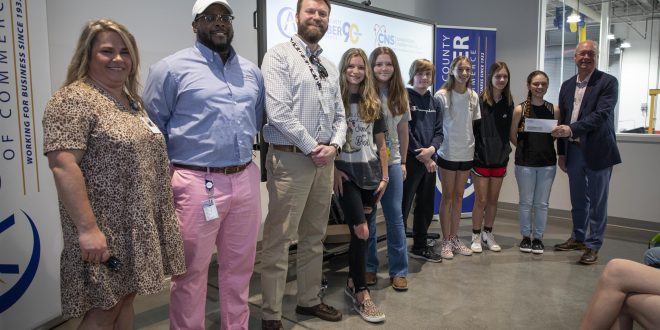 Norwood Middle School students, who partnered with Aisin Automotive, took first place in the Dream it. Do it. competition that introduces middle-school students to opportunities in manufacturing. (Photo submitted)

Norwood Middle School wins ‘Dream It. Do It.’ competition

(CNS press release) With a nod to Willy Wonka, Norwood Middle School’s video featuring a golden piston earned first place in the annual Dream it. Do it. competition sponsored by the Anderson County Chamber and Consolidated Nuclear Security (CNS).

The competition pairs students from Anderson County middle schools with local manufacturers. The student teams work with the companies to develop videos that describe the businesses. The entries are reviewed against a rubric scored by a team of judges, with the top three schools receiving monetary donations from CNS for classroom resources. The Peoples’ Choice Award is determined by votes from the public on the Anderson County Chamber website, with the winners also receiving a donation for their school.

The students used various methods to communicate about the industries, from newscasts to creative tales. From Mee Maw to Superman, the videos engaged viewers with descriptions of local manufacturing operations.

Adapting a scenario from Charlie and the Chocolate Factory by Roald Dahl, Norwood Middle School’s submission with a search for the golden piston located under the hood of a Toyota. That piston was the key to a Wonka-ish tour of Aisin Automotive describing its processes and products for “Charlene” and “Mee Maw”. The piston unlocked the judges’ votes as well, earning Norwood Middle School a $1,000 donation from CNS for classroom resources.

“Each year, I’m blown away by the creativity of these students,” said Kristin Waldschalger, CNS educational outreach specialist. “Seeing them represent the industries in such unique ways demonstrates their understanding and appreciation of the companies.”

“We are thrilled with the participation of local companies in this program,” said Anderson County Chamber President, Rick Meredith. “They are providing so much more than access to their facilities—they are providing insight into future careers.”

Jim Harris has been WYSH's News & Sports Director since 2000. In addition to reporting local news, he is the play-by-play voice for Clinton High School football, boys' and girls' basketball and baseball. Catch Jim live weekdays beginning at 6:30 am for live local news, sports, weather and traffic plus the Community Bulletin Board, shenanigans with Ron Meredith and more on the Country Club Morning Show on WYSH. Jim lives in Clinton with his wife Kelly and daughter Carolina, and cats Oliver, Bow and Libby.
Previous Oak Ridge fireworks display details
Next Drayton Hawkins tapped to take over Oak Ridge High School