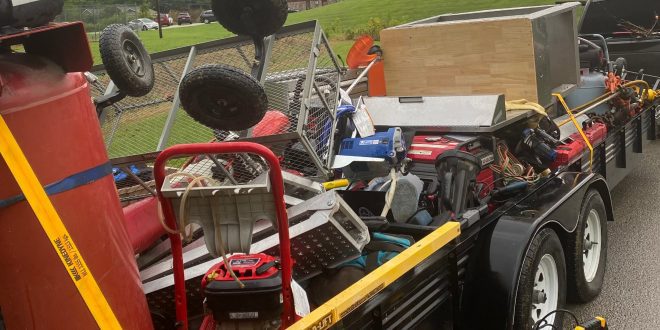 Investigators with the Campbell County Sheriff’s Office conducted a raid Monday at a home located just a “few hundred feet” away from Jellico Elementary School and recovered allegedly stolen property as well as a large amount of drugs, as well as removed a small child from what were described as “dangerous” conditions.

According to a CCSO press release, investigators raided the Poplar Avenue residence of Dustin Omar Louden and Sarah Rashay Sutton.

Inside, deputies say they located over $36,000 worth of stolen property as well as what officials described as a “large amount (sic) of various drugs, including heroin, methamphetamine, methadone, morphine, suboxone, clonazepam, alprazolam, gabapentin, and marijuana.”

Investigators say that several handguns and a rifle were recovered, along with multiple digital scales, glass pipes, and hypodermic syringes.

Most importantly, according to the release, a young child was also safely removed from the home. Officials say that the child had “easy access to the drugs, guns,” and other contraband.

Both Louden and Sutton were each charged with more than a dozen crimes, including child abuse and sveral counts of drug possession.

Further charges are pending in connection with this case as the investigation continues.

Jim Harris has been WYSH's News & Sports Director since 2000. In addition to reporting local news, he is the play-by-play voice for Clinton High School football, boys' and girls' basketball and baseball. Catch Jim live weekdays beginning at 6:30 am for live local news, sports, weather and traffic plus the Community Bulletin Board, shenanigans with Ron Meredith and more on the Country Club Morning Show on WYSH. Jim lives in Clinton with his wife Kelly and daughter Carolina, and cats Oliver, Bow and Libby.
Previous Kingston officer avoids, crash, arrests the other driver
Next TDOT Smartway now available on state app