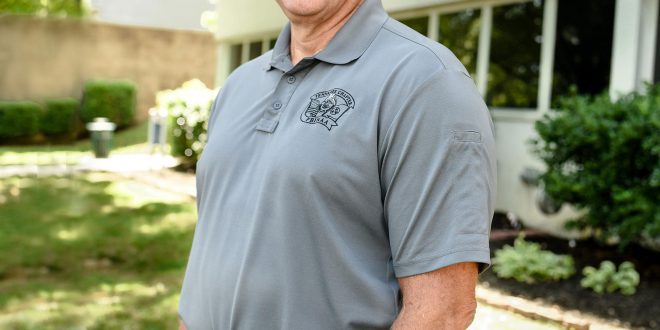 (By Bob Fowler, Roane State staff writer) If Danny Wright hadn’t been cutting a class and playing cards in Roane State’s student lounge, his life would have been very different.

Highway patrol officers on a recruiting mission had entered the lounge and handed out information about careers in law enforcement. As a student, that intrigued him, Wright said.

He enrolled in Roane State’s first police science class in the spring of 1974. “The rest, as they say, is history,” he said.

During his lifelong career in law enforcement, Wright’s credentials include:

He‘s currently in the middle of his fifth four-year term on the Roane County Board of Education, and served as its chairman in 1994.

Wright, 67, and a Harriman resident, also continues to referee high school and middle school basketball games throughout the region.

Wright’s association with Roane State goes back years. He recalls working in the maintenance department as a teenager and helping move Cuyler Dunbar’s enormous desk into his third-floor office. That office was inside the building that would later be named for Dunbar as Roane State’s first president.

During his career, Wright has investigated cases ranging from homicide to armed robbery, and about one-fourth of his work involved illegal drug cases.

He worked as a Tennessee Bureau of Investigation undercover narcotics agent for five years. One drug investigation spanned eight months and resulted in the seizure of more than 120 pounds of cocaine and $3.5 million in cash.

Wright earlier served as interim Roane State police chief for nearly a year at the request of Marsha Mathews, vice president of business and finance.

He was hired full-time last December. He is responsible for overseeing law enforcement at all of Roane State’s nine campuses. The department has 11 certified police officers and 30 part-time security officers.

Three officers have been certified as instructors in active shooter training and will be teaching those principles to other officers, he said.

Wright’s daughter, Raganne Treadway, is taking classes at Roane State to become certified as a registered nurse, he said.

Information about Roane State’s Department of Public Safety can be found online at www.roanestate.edu/police.

Jim Harris has been WYSH's News & Sports Director since 2000. In addition to reporting local news, he is the play-by-play voice for Clinton High School football, boys' and girls' basketball and baseball. Catch Jim live weekdays beginning at 6:30 am for live local news, sports, weather and traffic plus the Community Bulletin Board, shenanigans with Ron Meredith and more on the Country Club Morning Show on WYSH. Jim lives in Clinton with his wife Kelly and daughter Carolina, and cats Oliver, Bow and Libby.
Previous Jacksboro man killed in Friday crash
Next Dragon Nation mourns loss of Craig Dixon