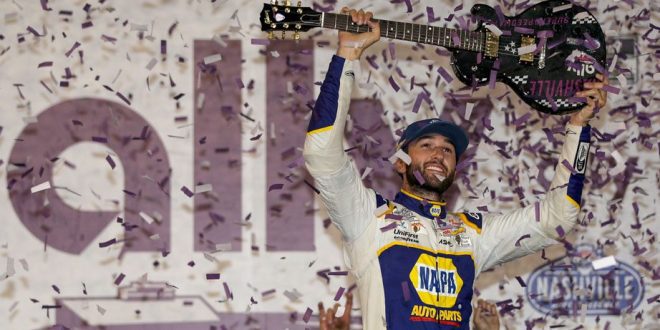 After a late caution slowed the action in Sunday’s Ally 400, Elliott remained on the track and led the field to a restart with four laps left at Nashville Superspeedway.

Elliott pulled away from runner-up Kurt Busch and powered his No. 9 Hendrick Motorsports Chevrolet across the finish line by a margin of 0.551 seconds.

It might be more accurate to say the Toyota drivers beat themselves by pitting during the 10th and final caution on Lap 293, the result of a blown engine in Josh Bilicki’s Chevrolet.

While Elliott and Kurt Busch stayed out under caution, along with eight other drivers, Kyle Busch, Truex and Hamlin all came to pit road for tires. Of the three, only Hamlin advanced over the final four laps, finishing sixth behind Ryan Blaney, Kyle Larson and Ross Chastain.

For much more on Sunday’s race, follow this link.

(Reid Spencer, NASCAR Wire Service/MRN.com) On a blindingly hot day at Nashville Superspeedway, Justin Allgaier fulfilled a dream in one of the best race cars he’s ever had.

Leading five times for 134 laps and sweeping the first two stages of Saturday‘s Tennessee Lottery 250, Allgaier breezed to his first NASCAR Xfinity Series victory at the 1.33-mile concrete track, his second of the season and the 18th of his career.

“This guitar has been on my bucket list for a long, long time,” Allgaier said, who won in his eighth start at Nashville, dating to 2009. After a 10-year pause in racing at the track, Allgaier finished second last year.

Herbst finished third, followed by Ty Gibbs and Sam Mayer, both of whom were involved in a late-race incident that turned Gibbs No. 54 Toyota sideways — setting up a masterful save.

The victory was the second straight for David Gilliland Racing, after Todd Gilliland won last Saturday‘s NASCAR Camping World Truck Series race on dirt at Knoxville Raceway in the No. 17 Ford, the same number Preece drove on Friday.

The win was an encore performance for Preece, who scored his first Truck Series victory in last year‘s Nashville race. A part-time utility player in the Ford camp this season, Preece triumphed for the second time in his eighth career start.

In addition to the traditional guitar trophy, Preece also earned a $50,000 bonus for winning the second event in the NCWTS Triple Truck Challenge.

Preece took control of the race in the second stage, passing Smith for the lead on Lap 74. After winning the stage, which ended on Lap 95, Preece forged a comfortable lead before the trucks of Grant Enfinger, Corey Heim, Matt DiBenedetto and Ty Majeski hurtled into Turn 3 four-wide.

Smith took the series lead by 21 points over Nemechek.

Jim Harris has been WYSH's News & Sports Director since 2000. In addition to reporting local news, he is the play-by-play voice for Clinton High School football, boys' and girls' basketball and baseball. Catch Jim live weekdays beginning at 6:30 am for live local news, sports, weather and traffic plus the Community Bulletin Board, shenanigans with Ron Meredith and more on the Country Club Morning Show on WYSH. Jim lives in Clinton with his wife Kelly and daughter Carolina, and cats Oliver, Bow and Libby.
Previous TDOT halting lane closures for Independence Day holiday
Next OR Community Band Independence Day Concert info