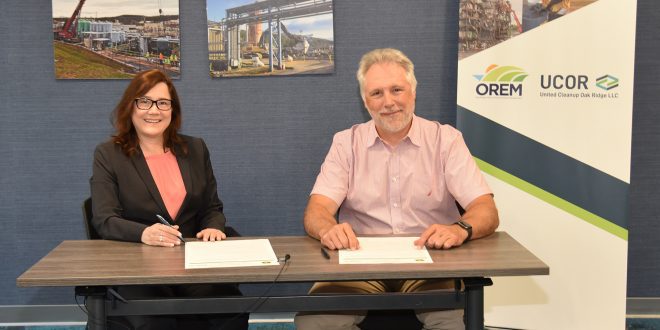 Monday was the first day of work for the new-look United Cleanup Oak Ridge (UCOR) as the company undertakes the $8.3 billion Oak Ridge Reservation Cleanup Contract. The company is a new configuration of UCOR, formerly an Amentum-led partnership with Jacobs.  Under the new name and new contract, Amentum and Jacobs are joined by Honeywell to form the leadership team. Additional teaming partners of the joint venture are RSI Entech, StrataG, Longenecker & Associates, and Environmental Alternatives Inc. (EAI).

According to a company press release, the newly configured UCOR will continue the successful performance that has been a hallmark of the company since it took over cleanup operations in 2011.  In 2020, UCOR successfully closed out the East Tennessee Technology Park contract almost $100 million under budget. That accomplishment was the first-in-the-world cleanup of a gaseous diffusion plant.

“People and partnerships were what made us successful in the previous iteration of UCOR,” said Ken Rueter, UCOR president and chief executive officer in the releases issued Monday. “During our 11-plus years of safely cleaning up ETTP and other Reservation sites, we developed a highly skilled workforce that is second to none in their performance and dedication to safety.”

In the release, Rueter also noted the power of the “incredible partnerships” the company developed with the community, elected leaders, labor, and stakeholder groups. “Now that much of our work has shifted to ORNL and Y-12, we depend on strong relationships with the prime contractors and federal offices at those sites. All of these partnerships are critical to our successful support of DOE’s priorities in a way that best benefits taxpayers.”

Under this new contract, while UCOR will continue the final soil and groundwater remediation at ETTP, the company will focus on removing unneeded, contaminated facilities at ORNL and the Y-12. At ORNL, there are more than 125 facilities identified for demolition, 30 of which are considered high risk. At Y-12, more than 90 facilities will eventually be demolished, with 25 of those being high risk. Most of this demolition is expected to be completed by 2031. Completion of this contract will not only deliver environmental risk reduction but enable historic preservation, conservation, and future economic development, according to company officials.

Another major component of UCOR’s contract is the construction of a proposed new on-site disposal facility to handle the wastes that will be generated by this environmental cleanup. The proposed Environmental Management Disposal Facility will replace the current onsite facility, which has almost reached its capacity. UCOR’s use of onsite disposal, according to company leaders, has saved taxpayers “significant” money and also kept waste off public roadways.

The Department of Energy Office of Environmental Management issued the new contract as an Indefinite-Delivery/Indefinite-Quantity vehicle with a 10-year ordering period.

Learn more about the company at www.UCOR.com.

Jim Harris has been WYSH's News & Sports Director since 2000. In addition to reporting local news, he is the play-by-play voice for Clinton High School football, boys' and girls' basketball and baseball. Catch Jim live weekdays beginning at 6:30 am for live local news, sports, weather and traffic plus the Community Bulletin Board, shenanigans with Ron Meredith and more on the Country Club Morning Show on WYSH. Jim lives in Clinton with his wife Kelly and daughter Carolina, and cats Oliver, Bow and Libby.
Previous Chester “Red” Cox, 83 of Clinton
Next Fraterville Mine Disaster remembered 120 years later