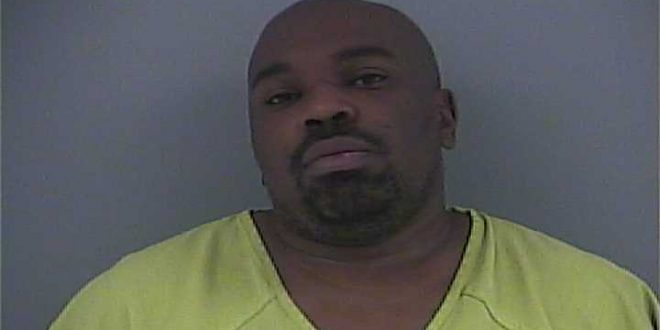 A call of a prowler early Saturday in Clinton ended with the arrest of a Knoxville man on several charges, including aggravated assault and stalking.

Clinton Police were called to a home on Glenn Street at around 12:30 am on Saturday, April 16th on a report of a prowler.  Upon arrival, the first officer on the scene encountered and detained a man dressed in all black next to an SUV that had been spray-painted.  Next to the man on the ground were a can of green spray paint, wire cutters, and a flashlight, according to the arrest report.  The suspect was identified as Frederick St. Hill III of Knoxville and placed in a patrol car while officers investigated.

The female resident of the home told police that the man was her ex-husband and that he was the person responsible for the damage to her vehicle, which included spray-painted graffiti insulting her with obscenities in green on the driver’s side.  Officers noticed fluid dripping from under the front and back of the vehicle, and the woman told investigators that St. Hill had threatened to kill her in the past and that she believed that he had cut her brake lines.  When asked to test the brakes, she told officers that they were not working.

The woman said that police had been to her residence “numerous times” on similar prowling complaints, and a check with dispatchers revealed that officers had been called to the house twice in the days leading up to Saturday morning’s incident.

A search of the area turned up a security camera at a house across the street that had been spray-painted green.

According to the CPD report, while being transported to the Anderson County Jail, St. Hill made a spontaneous declaration that he had only done it “because she put me out with nowhere to go and drained my money.”

St. Hill was charged with felony counts of aggravated assault and vandalism, two misdemeanor counts of vandalism and a misdemeanor charge of stalking, and booked into the Jail without further incident.  As of this morning, he remained in custody on bonds totaling $75,000.

Jim Harris has been WYSH's News & Sports Director since 2000. In addition to reporting local news, he is the play-by-play voice for Clinton High School football, boys' and girls' basketball and baseball. Catch Jim live weekdays beginning at 6:30 am for live local news, sports, weather and traffic plus the Community Bulletin Board, shenanigans with Ron Meredith and more on the Country Club Morning Show on WYSH. Jim lives in Clinton with his wife Kelly and daughter Carolina, and cats Oliver, Bow and Libby.
Previous Anderson Republicans to host forum after monthly meeting
Next Early Voting Day 5 tally