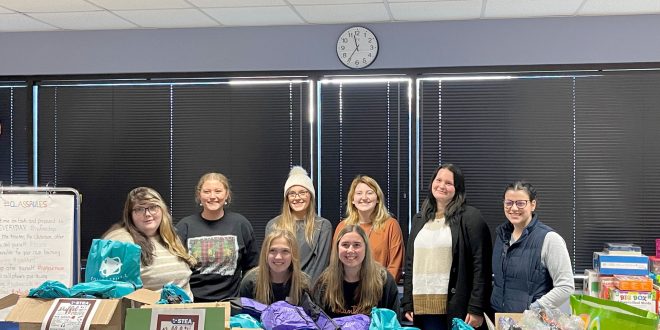 More than 50 children in foster care, who are often moved from one home to another, now have special bags filled with necessities and treats to take with them, thanks to Roane State students.

Those students with Roane State’s Student Tennessee Education Association (STEA) chapter took on the task during their latest service project, which they dubbed “The Duffel Drive.”

STEA members are college students interested in becoming teachers, and STEA is under the auspices of the National Education Association.

Members brainstormed the idea and created flyers seeking donations for the “cinch bags.” They then filled the bags with contributions from students and faculty at several Roane State campuses. Donations included snacks, books, headphones and toiletries.

The cinch bags were given to the Department of Children’s Services in Cumberland County for distribution to foster children in the county’s K-12 school system.

“We hope to pass that passion on to the STEA students in the process,” Bradshaw said. “In fact, we have noticed that the students who join the STEA chapter really seem to enjoy not only working on the projects, but also seeing the benefit that they are having for the communities in our service area.”

“I am extremely proud of the work they do to make these service projects a success,” Bradshaw said. She called the effort “a true testament to not only our STEA chapter and the work that they put into these projects to make them a success, but also to the generosity of our Roane State family.”

STEA members come up with a service project each semester that benefits children in one of the counties served by Roane State. Chapter members meet three times each semester.

Jim Harris has been WYSH's News & Sports Director since 2000. In addition to reporting local news, he is the play-by-play voice for Clinton High School football, boys' and girls' basketball and baseball. Catch Jim live weekdays beginning at 6:30 am for live local news, sports, weather and traffic plus the Community Bulletin Board, shenanigans with Ron Meredith and more on the Country Club Morning Show on WYSH. Jim lives in Clinton with his wife Kelly and daughter Carolina, and cats Oliver, Bow and Libby.
Previous Energy Secretary visits ORNL
Next ‘It’s a good thing.” Clinton highlighted by none other than Martha Stewart