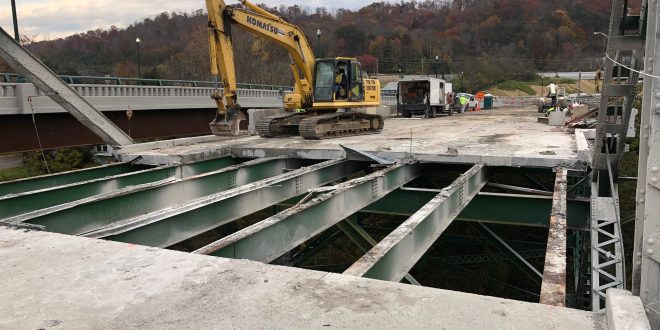 New Lewallen Bridge could be fully open by mid-December

The City of Clinton’s TDOT Liaison/Project Coordinator, Lynn Murphy, has provided another update on the ongoing project to replace the Lewallen Bridge over the Clinch River.

The new bridge has been open to traffic in both directions for a couple of weeks now, but without access to the new sidewalks and bike lanes.  Murphy tells WYSH that there are currently two separate operations in progress, one focusing on opening the full width of the bridged, and the other focusing on demolishing the old bridge.

Crews working to get the full expanse of the bridge open have spent this week installing stormwater drainage pipe, as well as installing concrete curb and gutter and concrete sidewalks. The new concrete work will connect to the southbound ends of the new bridge and continue to the ends of the project, according to Murphy’s response to our questions.  Other priorities as far as getting the full width of the bridge operational also include wiring for, and installation of, the remaining street lights as well as the river navigation lights.

Once all of that is complete, Murphy says that the top layer of asphalt can then be installed, and new pavement markings will be painted, using the full width of the bridge. This will return the original turn lane configuration for northbound traffic (two left turns headed toward Oak Ridge, two straight lanes taking you into downtown on Clinch Avenue/Main Street, and one right turn headed toward Norris) along with the eight- feet wide center dividing buffer, and bike lanes in each direction.

In the update, Murphy says that “Blalock tells me that the target date for using the full width of the bridge is December 15th,” but said that TDOT may be able to provide an updated timeline.  We have reached out and will let you know if there is new information to pass along. Murphy says that demolition of the old bridge will be done in stages, so if you were expecting a massive implosion or something along those spectacular lines, you are out of luck.

Crews have already removed the asphalt road surface by grinding it down to the concrete deck below and will follow an engineering plan for the removal of the steel underneath, so the structural integrity is maintained throughout the process.

Next up is the removal of the concrete sidewalks and concrete parapet walls by using a large diameter concrete saw blade to cut sections of various lengths, which are then hoisted by a crane, a process Murphy calls “time-consuming.” The update says that the concrete saw uses water to keep the blade cool, and all of the concrete dust/water slurry runoff is contained by using a large wet vacuum system. Additionally, a barge covered with wood mulch is parked underneath the worksite to catch any runoff that does escape, to avoid any concrete dust slurry from getting into the river.

The large concrete pieces, some weighing as much as five tons—or 10,000 pounds, are pulverized with a hydraulic rock hammer device, and the debris is hauled away.  The concrete deck floor will be removed by sawing it into more manageable-sized sections, and then hoisted by a crane, pulverized, and hauled away.

Once all concrete is removed, the steel removal begins, according to Murphy. Large sections of steel will be cut free by workers using handheld oxygen-acetylene cutting torches. A barge-mounted crane will then lower them to an empty barge, where larger sections will be cut into smaller pieces, and then transferred to trucks for removal.

The large beams will be retained for future use and the smaller pieces will be recycled as scrap iron. All steel belongs to Blalock, under terms of the contract.

When all the bridge steel has been removed, the two concrete piers will be removed from the river by “sawing them off a few feet above the water surface level.” The remaining concrete pier sections in the water will then have holes drilled vertically into them, and low-level explosives will be used to break them up.

Once detonated, any concrete and reinforcement steel in the water will be removed using a clamshell bucket attached to a crane cable, according to the update.  Murphy’s update states that there is currently no timetable for the time required for demolition.

As we receive more updates on the timeline to complete all of the work associated with the almost $28-million-dollar project, we will pass them along to you.

Jim Harris has been WYSH's News & Sports Director since 2000. In addition to reporting local news, he is the play-by-play voice for Clinton High School football, boys' and girls' basketball and baseball. Catch Jim live weekdays beginning at 6:30 am for live local news, sports, weather and traffic plus the Community Bulletin Board, shenanigans with Ron Meredith and more on the Country Club Morning Show on WYSH. Jim lives in Clinton with his wife Kelly and daughter Carolina, and cats Oliver, Bow and Libby.
Previous GIVE grants announced by state leaders
Next Local Sports Update