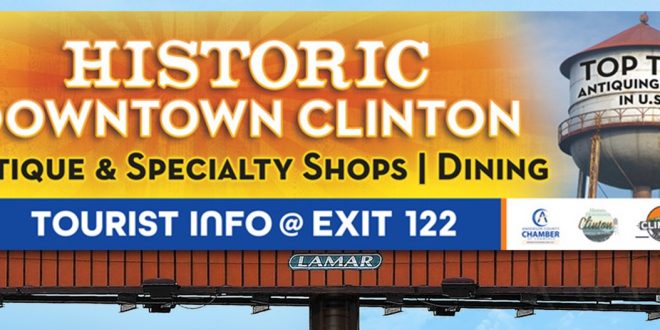 Jim Harris November 24, 2021 Featured, Local News Comments Off on ‘It’s a good thing.” Clinton highlighted by none other than Martha Stewart 505 Views

Check this out, it’s pretty cool.

Martha Stewart has designated Clinton the best place to go antiquing in the country.

You can see the complete list by following this link, but Clinton’s Historic Downtown District is garnering more national attention, and as the Domestic Queen Martha Stewart herself might say, “it’s a good thing.”

Here is the brief blurb from the website that accompanies Clinton’s place at the top of the list.

“Smaller towns tend to offer far better deals than big cities,” says Martin. He could very well be describing Clinton, a southern charmer whose historic Main Street is home to more than 20 antique shops. They sell items like American and primitive period furnishings and hand-poured scented candles that visitors can’t get enough of. Plan to browse at Burrville Antiques and the Shoppe at 350 Market.”

Jim Harris has been WYSH's News & Sports Director since 2000. In addition to reporting local news, he is the play-by-play voice for Clinton High School football, boys' and girls' basketball and baseball. Catch Jim live weekdays beginning at 6:30 am for live local news, sports, weather and traffic plus the Community Bulletin Board, shenanigans with Ron Meredith and more on the Country Club Morning Show on WYSH. Jim lives in Clinton with his wife Kelly and daughter Carolina, and cats Oliver, Bow and Libby.
Previous RSCC group helps kids in foster care
Next Clinton boys, girls split vs. Powell