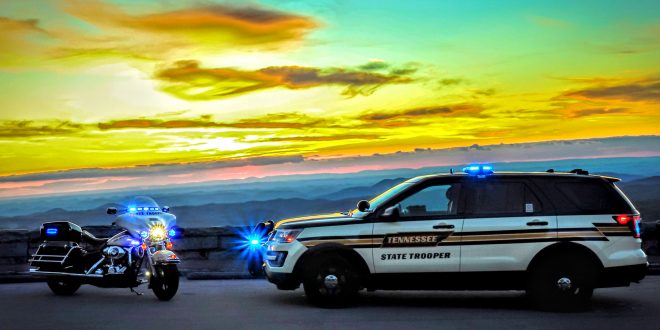 Commissioner Jeff Long of the Tennessee Department of Safety and Homeland Security along with Colonel Matt Perry of the Tennessee Highway Patrol announced the promotion of Stacey Heatherly to Captain over the Knoxville district.

“Captain Heatherly has demonstrated her passion and devotion to the Tennessee Highway Patrol over the course of her 23-year career,” said Colonel Matt Perry. “I know she will serve her district with professionalism and pride.”

Captain Heatherly graduated from the Trooper Academy in 1998, and worked as a patrol trooper in Wilson and then Campbell County. She was promoted to Sergeant in 2007, in the Office of Professional Accountability. Captain Heatherly continued as a Sergeant at the Knox County Scales, then over patrol in Knox and Union counties before being promoted to Lieutenant. She also served Anderson, Campbell, and Scott counties as a patrol Lieutenant before moving to Special Programs. Captain Heatherly graduated from the Northwestern School of Police Staff and Command in 2012.

“Through her various roles in the Knoxville district, Captain Heatherly has routinely demonstrated that she has a heart for service, and an overwhelming commitment to the community she leads,” said Commissioner Jeff Long.

Jim Harris has been WYSH's News & Sports Director since 2000. In addition to reporting local news, he is the play-by-play voice for Clinton High School football, boys' and girls' basketball and baseball. Catch Jim live weekdays beginning at 6:30 am for live local news, sports, weather and traffic plus the Community Bulletin Board, shenanigans with Ron Meredith and more on the Country Club Morning Show on WYSH. Jim lives in Clinton with his wife Kelly and daughter Carolina, and cats Oliver, Bow and Libby.
Previous ‘Angel Tree’ returns to AC Courthouse
Next State Fire Marshal shares Thanksgiving fire safety tips