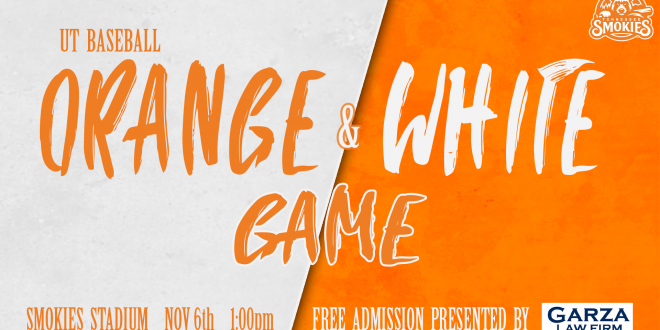 “The guys are thrilled about playing at Smokies Stadium,” said University of Tennessee Head Coach Tony Vitello. “They have formed a great relationship with our program and it will be a great opportunity to play in front of, and interact with our fans.”

At the conclusion of the game, the players and coaches will have an autograph meet-and-greet on the concourse for fans in attendance. This will be a free event to attend with complimentary parking, and free admission seating presented by Garza Law Firm. Concession stands, beer carts, and the retail store will be open for guests. Gates open at 12:00pm.

“Tony Vitello has quickly become one of the most influential role models since arriving in East Tennessee,” said Marcos Garza of Garza Law Firm. “Having had the blessing of meeting him, the Garza Law Firm is honored to support any opportunity for others to get to meet this extraordinary person.”

The Vols are coming off one of their most successful seasons to date. Vitello was awarded the 2021 Mike Martin National Coach of the Year while leading the University of Tennessee baseball team to be the SEC East Champions, a trip to Omaha, and finishing out the season 50-18.

“The Tennessee Smokies and Boyd Sports are excited, and honored to host the Vols for the annual “Orange & White Game,” said Boyd Sports President Chris Allen. “We look forward to showcasing the many talents these young men have, here at America’s Friendliest Ballpark.”

The Tennessee Smokies will commence their 2022 season on Friday, April 8, 2022 against the Chattanooga Lookouts.  The full schedule and ticket information for next season can be found online at smokiesbaseball.com, or by calling the Smokies Front Office at 865-286-2300.

Jim Harris has been WYSH's News & Sports Director since 2000. In addition to reporting local news, he is the play-by-play voice for Clinton High School football, boys' and girls' basketball and baseball. Catch Jim live weekdays beginning at 6:30 am for live local news, sports, weather and traffic plus the Community Bulletin Board, shenanigans with Ron Meredith and more on the Country Club Morning Show on WYSH & WQLA. Jim lives in Clinton with his wife Kelly and daughter Carolina, and cats Oliver, Bow and Libby.
Previous CHS Homecoming this Friday; 5 to be added to Wall of Fame
Next CPD: 2 killed, 6 injured in van rollover crash