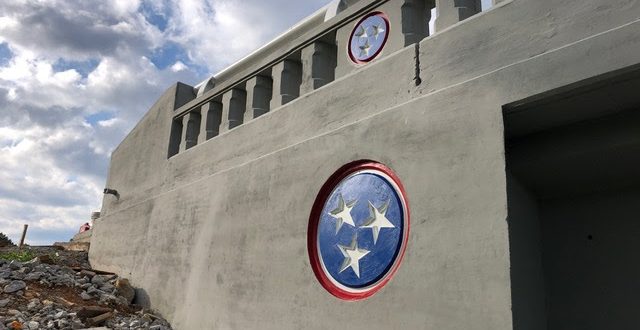 New bridge in Clinton carrying vehicles in both directions

As of early this morning, the new bridge connecting South Clinton and Clinton spanning the Clinch River is open to traffic.  The bridge began carrying vehicles both north and southbound at around 6 am today.  In addition, the lane closure on Clinch Avenue headed north just before the work zone has been lifted, so now there are two lanes of travel in both directions.

Northbound traffic has three options once crossing the bridge, with traffic lights at the intersection with Seivers Boulevard controlling a dedicated left-turn lane toward Oak Ridge, a middle lane that carries you straight in to downtown Clinton on Main Street, and a right-hand turn lane headed toward Norris.

The project to replace the original Lewallen Bridge, which was built in 1940, began in September of 2018.  The next part of the project will be the demolition of the existing bridge and the repair and improvement of Riverside Drive near the bridge construction site.

Jim Harris has been WYSH's News & Sports Director since 2000. In addition to reporting local news, he is the play-by-play voice for Clinton High School football, boys' and girls' basketball and baseball. Catch Jim live weekdays beginning at 6:30 am for live local news, sports, weather and traffic plus the Community Bulletin Board, shenanigans with Ron Meredith and more on the Country Club Morning Show on WYSH & WQLA. Jim lives in Clinton with his wife Kelly and daughter Carolina, and cats Oliver, Bow and Libby.
Previous HSFB polls released
Next CHS Class of 1961 holding 60th reunion