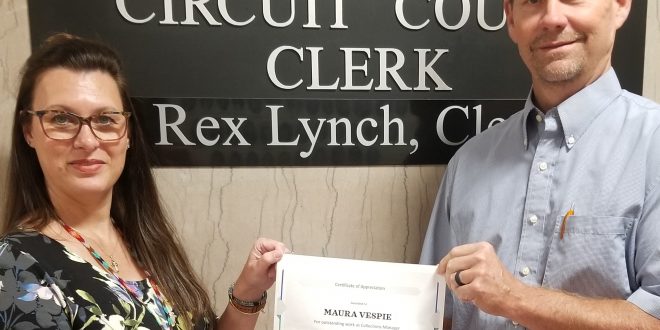 “This is great news for Anderson County taxpayers and confirmation that the implementation of new procedures and the addition of a key staff position are paying dividends,” Lynch stated in a press release, and adding that, “in 2018, the Collections Manager, Maura Vespie, and I looked at ways to make the process more accountable and to collect a higher percentage of costs and fines. Maura has done a great job implementing those changes over the past three years.”

She recently received a Certificate of Appreciation for her hard work as Collections Manager.

The Circuit Court Clerk’s Office collected more than $3 million dollars during FY 2021 and provided more than $800,000 in revenue for Anderson County, an increase of $55,000 over the projected amount budgeted for the year. All funds collected over the budgeted amount go into the county reserves to be used as needed for emergencies.

“This is an outstanding accomplishment when you consider reduced court appearances due to COVID in the past year. The professional standards we have implemented helped us focus on collecting past due fees from previous years,” Lynch added.

The Circuit Court Clerk’s Office is responsible for filing and maintaining legal documents presented by attorneys, pro se litigants, and law enforcement for the Circuit and Criminal, General Sessions Division I and II, and the Juvenile Courts within Anderson County, as well as collecting associated fees and fines of these courts. The Circuit Court Clerk’s offices combined, file approximately 15,000 cases per year.

Jim Harris has been WYSH's News & Sports Director since 2000. In addition to reporting local news, he is the play-by-play voice for Clinton High School football, boys' and girls' basketball and baseball. Catch Jim live weekdays beginning at 6:30 am for live local news, sports, weather and traffic plus the Community Bulletin Board, shenanigans with Ron Meredith and more on the Country Club Morning Show on WYSH & WQLA. Jim lives in Clinton with his wife Kelly and daughter Carolina, and cats Oliver, Bow and Libby.
Previous More on Sheriff’s Operation Angel Wing honor
Next Cades Cove Loop Road re-opens Tuesday