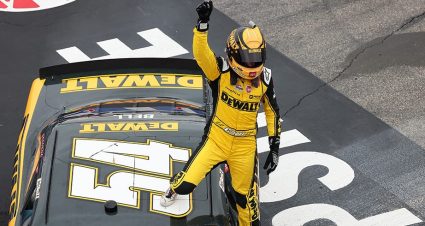 (MRN.com) Kyle Busch had used up his eligibility for this year in the NASCAR Xfinity Series.

Ty Gibbs had the week off.

But the No. 54 Joe Gibbs Racing Toyota they have driven to a combined seven victories this season was still around—much to the chagrin of the series regulars.

Competing in the Xfinity Series for the first time since he finished third in the final standings in 2019, Christopher Bell led 151 of 200 laps, swept the first two stages and won Saturday’s Ambetter Get Vaccinated 200 at New Hampshire Motor Speedway.

The victory was Bell’s third straight at the 1.058-mile track and the 17th of his career. It was the sixth straight win for Joe Gibbs Racing at New Hampshire, which did not host an Xfinity Series race last year because of schedule changes necessitated by the coronavirus pandemic.

Bell was the only former New Hampshire winner in the field for Saturday’s race. He finished a comfortable 6.241 seconds ahead of runner-up Justin Allgaier, who held off third-place Daniel Hemric during the final 45-lap green-flag run.

For a complete wrap-up of the New Hampshire race, follow this link.

Jim Harris has been WYSH's News & Sports Director since 2000. In addition to reporting local news, he is the play-by-play voice for Clinton High School football, boys' and girls' basketball and baseball. Catch Jim live weekdays beginning at 6:20 am for live local news, sports, weather and traffic plus the Community Bulletin Board, shenanigans with Ron Meredith and more on the Country Club Morning Show on WYSH & WQLA. Jim lives in Clinton with his wife Kelly and daughter Carolina, his mother-in-law and cats Lucius and Oliver.
Previous Gertrude (Trudy) Mary Janisch (nee Dawidowicz), age 83 of Clinton
Next NCS: Almirola upsets the playoff apple cart with win in New Hampshire