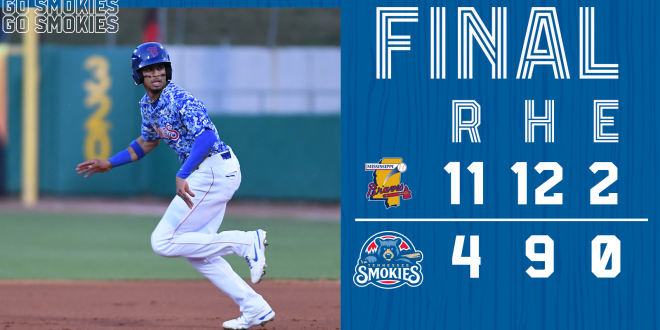 Mississippi (38-23) jumped on Tennessee early with a five run second inning. A Wendell Rijo high fly ball dropped in left field and scored one pitch later on C.J. Alexander’s two-run home run to right field. Jefrey Ramos’ single and Jalen Miller’s walk gave the M-Braves baserunners and both would come into score. The fifth run in the inning scored on a groundout.

The Braves would load the bases in the third inning with a pair of singles and a walk with no-outs. Ramos grounded into a double play, scoring one, and a wild pitch extended Mississippi’s lead to 7-0.

Christopher Morel’s triple down the left field line and Darius Hill’s sacrifice fly got the Smokies on the board in the fourth inning, cutting Mississippi’s lead to 7-1.

Tennessee (24-33) would add two more runs in the fifth inning as Nelson Maldonado and Tim Susnara singled and scored on Edwin Figuera’s two-run double down the right field line.

Mississippi responded in the sixth inning, scoring three runs to extend it’s lead to 10-3. A Greyson Jenista home run got the inning started. Then, with runners on second and third, a wild pitch brought home one run with the second scoring on Trey Harris’ RBI single up the middle.

The Braves scored another run in the eighth inning after Harris’ solo home run. The Smokies rounded out the scoring in the bottom half when Jared Young scored on Maldonado’s RBI single.

Maldonado led the way offensively, going 3-for-4 with an RBI, Edwin Figuera finished 2-for-4 with a two-run double in his Smokies debut. RHP Dakota Chalmers (L, 0-1) took the loss, he allowed seven runs on six hits and four walks in three innings. RHP Erich Uelmen pitched two perfect innings in his first relief appearance of the year.

Wednesday night at Smokies Stadium is All You Can Eat Wednesday presented by M3 Technology. Tickets for the entire M-Braves series are available and can be purchased online, over the phone, or by visiting the box office.

Jim Harris has been WYSH's News & Sports Director since 2000. In addition to reporting local news, he is the play-by-play voice for Clinton High School football, boys' and girls' basketball and baseball. Catch Jim live weekdays beginning at 6:20 am for live local news, sports, weather and traffic plus the Community Bulletin Board, shenanigans with Ron Meredith and more on the Country Club Morning Show on WYSH & WQLA. Jim lives in Clinton with his wife Kelly and daughter Carolina, his mother-in-law and cats Lucius and Oliver.
Previous RAM holding clinic in Caryville in August
Next CPD’s Bailey completes LEIC training