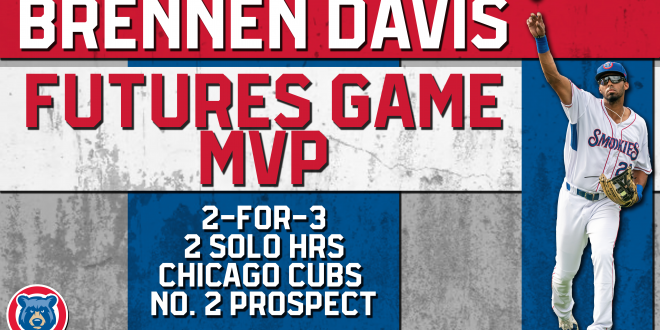 Tennessee Smokies outfielder Brennen Davis was named the Most Valuable Player of the 2021 Futures Game at Coors Field in Colorado. The Chicago Cubs No. 2 prospect, according to MLB Pipeline, went 2-for-3 with two solo home runs in the National League Futures 8-3 win.

After striking out in his first at-bat, Davis hit a solo home run 428 feet to straight-away center field off Minnesota Twins No. 12 prospect Josh Winder, to put the NL up 6-0. Davis added his second home run in the bottom of the sixth inning, a solo shot off Baltimore Orioles prospect Marcos Diplan, to extend the NL’s lead to 7-0. Davis is just the third player in Futures Game history to hit two home runs in the same game, joining Alfonso Soriano in 1999 and Yusniel Diaz in 2018.

The Cubs drafted Brennen Davis in the second round, 62nd overall, of the 2018 draft out of Basha High School in Chandler, AZ. The 21-year-old is hitting .278 with four home runs and 14 RBI in 31 games with the Smokies this season.

Jim Harris has been WYSH's News & Sports Director since 2000. In addition to reporting local news, he is the play-by-play voice for Clinton High School football, boys' and girls' basketball and baseball. Catch Jim live weekdays beginning at 6:20 am for live local news, sports, weather and traffic plus the Community Bulletin Board, shenanigans with Ron Meredith and more on the Country Club Morning Show on WYSH & WQLA. Jim lives in Clinton with his wife Kelly and daughter Carolina, his mother-in-law and cats Lucius and Oliver.
Previous NPS seeking public input on Laurel Falls Trail Management Plan
Next Roane man charged in double stabbing