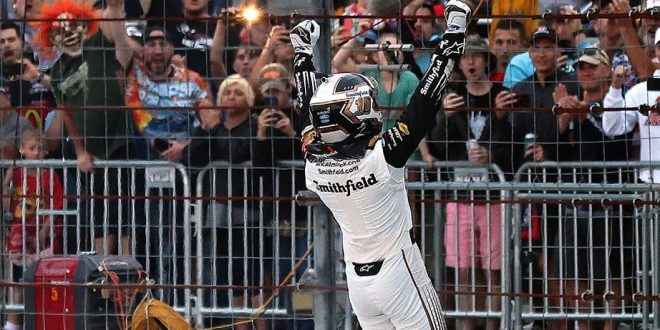 With hard-charging Christopher Bell closing behind him, Almirola crossed the finish line at the 1.058-mile track .657 seconds ahead of the Joe Gibbs Racing driver to win the third race of his career and give Stewart-Haas Racing its first ostensible playoff berth of the 2021 campaign.

After battling Team Penske teammates Brad Keselowski and Ryan Blaney — who waged their own internecine war shortly after the start of the third stage — Almirola had to hold off Bell to win for the first time this season and for the first time on a track that isn’t a superspeedway.

Penske teammates Keselowski, Joey Logano and Blaney ran third, fourth and fifth, respectively, with Logano recovering from a two-lap penalty incurred during the rain delay. Nicked for the two circuits when a crewman worked on his car during the red-flag period, Logano used two free passes under caution to his advantage.

Kevin Harvick finished sixth after winning the first stage and leading a race-high 66 laps, the first time since May 9 at Darlington the driver of the No. 4 Stewart-Haas Racing Ford had been at the front of the field.

Ford drivers claimed five of the top six finishing positions, with Bell in a Toyota being the only exception. Kyle Larson, Ross Chastain, Alex Bowman and Denny Hamlin completed the top 10.

For a complete wrap-up of the New Hampshire race, follow this link.

Jim Harris has been WYSH's News & Sports Director since 2000. In addition to reporting local news, he is the play-by-play voice for Clinton High School football, boys' and girls' basketball and baseball. Catch Jim live weekdays beginning at 6:20 am for live local news, sports, weather and traffic plus the Community Bulletin Board, shenanigans with Ron Meredith and more on the Country Club Morning Show on WYSH & WQLA. Jim lives in Clinton with his wife Kelly and daughter Carolina, his mother-in-law and cats Lucius and Oliver.
Previous XFS: Bell dominates in return to XFinity racing, wins third in row at New Hampshire
Next Reminder #1: State sales tax holiday expanded, extended