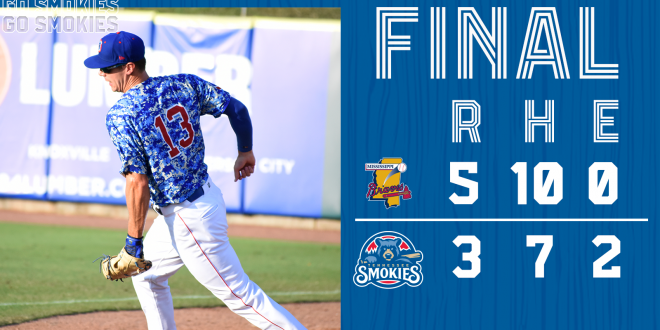 Mississippi (39-23) jumped out to a 2-0 lead in the first inning as Justin Dean singled, Drew Lugbauer walked, and Shea Langeliers singled to right field to bring Dean home. Brennen Davis’ throw into the infield was errant, allowing Lugbauer to score as well.

The Smokies (24-34) tied the game in the third inning with a pair of runs. Edwin Figuera singled and Davis walked to give the Smokies a pair of two-out baserunners. Jared Young brought the duo home with a double into the left-centerfield gap.

The M-Braves would quickly reclaim the lead in the top half of the fourth inning as Greyson Jenista reached base on a fielding error, and scored from first on Trey Harris’ RBI double. Mississippi would run Smokies’ starter RHP Javier Assad (L, 2-4) out of the game in the inning and reliever LHP Alex Katz would walk in a run to give the M-Braves a 4-2 lead.

Mississippi extended it’s lead to 5-2 in the fifth inning thanks to a Jalen Miller solo home run. In the eighth, Young hit a solo home run, his second of the season, to round out the scoring.

Jim Harris has been WYSH's News & Sports Director since 2000. In addition to reporting local news, he is the play-by-play voice for Clinton High School football, boys' and girls' basketball and baseball. Catch Jim live weekdays beginning at 6:20 am for live local news, sports, weather and traffic plus the Community Bulletin Board, shenanigans with Ron Meredith and more on the Country Club Morning Show on WYSH & WQLA. Jim lives in Clinton with his wife Kelly and daughter Carolina, his mother-in-law and cats Lucius and Oliver.
Previous Louise Long, age 97, of Clinton
Next Federal Education officials OK state plan for ARP funds