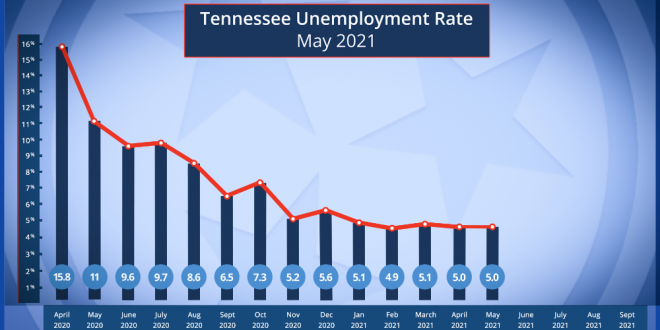 (TDLWD) Tennessee’s statewide unemployment rate held steady at 5% between April and May 2021, according to newly released data from the Department of Labor and Workforce Development (TDLWD).
While Tennessee’s unemployment rate did not change in the month-to-month comparison, it was 4.6 percentage points lower than the May 2020 rate. At that time, many of the state’s employers remained closed due to the COVID-19 health emergency. Just one month after the state recorded its highest unemployment rate in history, 15.8% in April 2020, the economy had already begun to show signs of improvement.
The latest statistics show Tennessee employers added 5,000 jobs between April and May. The largest increases occurred in the professional/business services, leisure/hospitality, and financial activities sectors.

Jim Harris has been WYSH's News & Sports Director since 2000. In addition to reporting local news, he is the play-by-play voice for Clinton High School football, boys' and girls' basketball and baseball. Catch Jim live weekdays beginning at 6:20 am for live local news, sports, weather and traffic plus the Community Bulletin Board, shenanigans with Ron Meredith and more on the Country Club Morning Show on WYSH & WQLA. Jim lives in Clinton with his wife Kelly and daughter Carolina, his mother-in-law and cats Lucius and Oliver.
Previous TDOT grant to fund improvements in LaFollette
Next AC government offices to be closed July 2-5