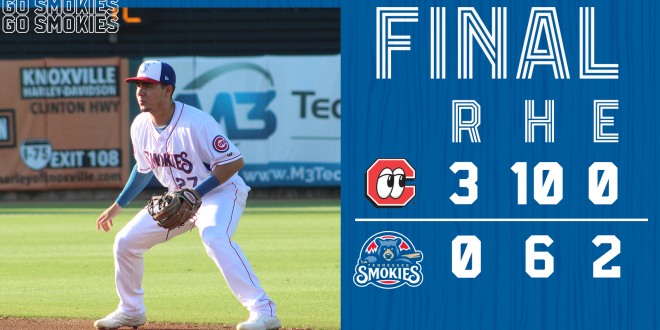 (Submitted, Tennessee Smokies) The Tennessee Smokies (11-25) were shutout by the Chattanooga Lookouts (22-15) 3-0 at Smokies Stadium Wednesday night. The Smokies bullpen allowed just one run over five combined innings and Chase Strumpf had two of the Smokies six hits in the loss.

Wilson Garcia opened the scoring in the third inning, homering to left field to give the Lookouts a 1-0 lead. Chattanooga wasn’t done in the inning as Lorenzo Cedrola’s two-out single scored Jose Barrero. Chattanooga’s final run scored in the sixth, Chuckie Robinson doubled, moved to third on a single, and scored on Garcia’s RBI groundout.

The Smokies and Lookouts continue their series at Smokies Stadium on Thursday night, with first pitch scheduled for 7 PM. RHP Cam Sanders (0-2, 4.59) will face off against RHP Dylan Baker.

Thursday night at Smokies Stadium is Thirsty Thursday presented by Coors Light. Tickets for the remainder of the series are available and can be purchased online, over the phone, or by visiting the box office.

Jim Harris has been WYSH's News & Sports Director since 2000. In addition to reporting local news, he is the play-by-play voice for Clinton High School football, boys' and girls' basketball and baseball. Catch Jim live weekdays beginning at 6:20 am for live local news, sports, weather and traffic plus the Community Bulletin Board, shenanigans with Ron Meredith and more on the Country Club Morning Show on WYSH & WQLA. Jim lives in Clinton with his wife Kelly and daughter Carolina, his mother-in-law and cats Lucius and Oliver.
Previous REMINDER: Road closures in OR for cycling event
Next MEDIC to give away Amazon E-Gift Card to entice donors