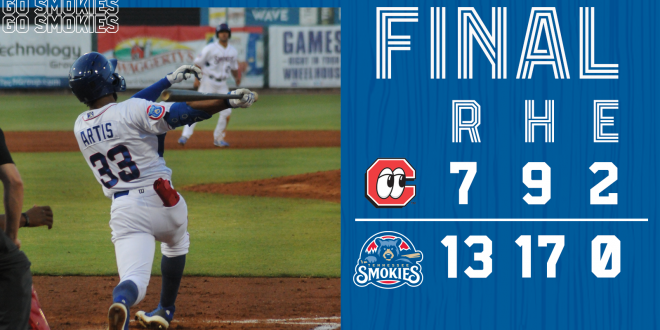 (Tennessee Smokies) The Tennessee Smokies (12-25) fell behind the Chattanooga Lookouts (22-16) 6-1 after three innings Thursday before scoring 12 straight runs in their 13-7 victory at Smokies Stadium. Chicago Cubs No. 2 prospect, according to MLB Pipeline, Brennen Davis and No. 7 prospect Christopher Morel both finished with four hits and reached base five times in the win.

The Lookouts scored once in the first, then in the second, Lorenzo Cedrola hit a three run home run to extend the lead to 4-0. Davis’s solo home run in the bottom of the second, his first of the season, put the Smokies on the board.

Morel hit an infield single in the seventh, then stole second and third and scored on a throwing error to extend the lead. In the eighth, Morel hit a two-run double to put the Smokies up 13-6. Yoel Yanqui’s RBI single in the ninth rounded out the scoring.

LHP Ryan Lawlor (W, 3-0) earned the win, striking out three over two perfect innings. LHP Bryan Hudson allowed just one hit and had four strikeouts in three scoreless innings. Morel finished 4-for-5 with three RBI and Davis finished 4-for-4 with a home run, two RBI, and four runs scored. Sepulveda and Maldonado both had three hits in the win.

The Smokies and Lookouts continue their series at Smokies Stadium on Friday night, with first pitch scheduled for 7 PM. RHP Erich Uelmen (0-4, 5.12) will start for the Smokies.

Friday night at Smokies Stadium is Canadian Appreciation Night. Tickets for the remainder of the series are available and can be purchased online, over the phone, or by visiting the box office.

To learn more about the Tennessee Smokies, visit www.smokiesbaseball.com.

Jim Harris has been WYSH's News & Sports Director since 2000. In addition to reporting local news, he is the play-by-play voice for Clinton High School football, boys' and girls' basketball and baseball. Catch Jim live weekdays beginning at 6:20 am for live local news, sports, weather and traffic plus the Community Bulletin Board, shenanigans with Ron Meredith and more on the Country Club Morning Show on WYSH & WQLA. Jim lives in Clinton with his wife Kelly and daughter Carolina, his mother-in-law and cats Lucius and Oliver.
Previous Marilyn Lee Albright Kesterson of Powell
Next TDOT grant to fund improvements in LaFollette