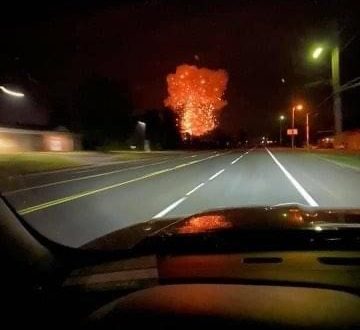 Residents of house that exploded indicted

The two residents of a house destroyed by an explosion caught on a Roane County Sheriff’s Office cruiser’s dash cam were indicted last week by the Roane County grand jury on charges stemming from the blast.

The explosion occurred just before 4:15 am on September 28th at a home located at 731 Gallaher Road, near the I-40 interchange in Kingston, and was recorded by the in-car camera of a sheriff’s deputy who happened to be traveling down Gallaher Road.

No one was injured in the explosion, but the blast did cause several smaller fires in the adjacent areas that were extinguished by the Kingston Fire Department.

Following a TBI investigation, evidence was presented last Monday (6/21/21) to the grand jury, which returned indictments against both of the men who lived in the house.

Steven Dowker and Thomas Price were both indicted on two felony counts of aggravated arson, as well as insurance fraud.

Johnson says that both men were arrested and booked into the Roane County Jail, and have since been released on bond. Both were due in court today (6/28/21).

Jim Harris has been WYSH's News & Sports Director since 2000. In addition to reporting local news, he is the play-by-play voice for Clinton High School football, boys' and girls' basketball and baseball. Catch Jim live weekdays beginning at 6:30 am for live local news, sports, weather and traffic plus the Community Bulletin Board, shenanigans with Ron Meredith and more on the Country Club Morning Show on WYSH. Jim lives in Clinton with his wife Kelly and daughter Carolina, and cats Oliver, Bow and Libby.
Previous Room decor, bees take center stage at Clinton Library
Next Council to meet Monday (6/28)