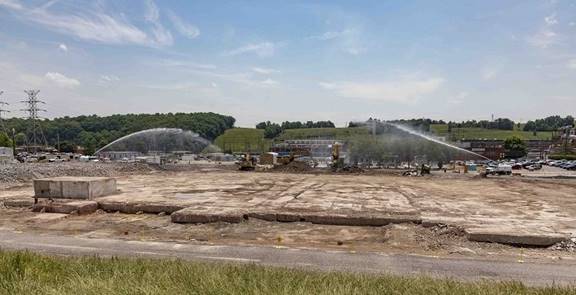 Crews have completed demolition on the last of 11 structures that comprised the former Biology Complex. Its removal enhances safety at the site and clears land for the National Nuclear Security Administration to reuse for national security missions. (Submitted)

The project, which is one of EM’s 2021 priorities, removes significant structural risks and opens land for national security missions.

“This is the most significant skyline change we’ve achieved at Y-12 as we begin our new chapter of cleanup,” Oak Ridge Office of EM Manager Jay Mullis said. “It highlights the transformative nature of our work, and now these experienced teams will move to other projects that address other vacant, deteriorated Manhattan Project and Cold War-era facilities at the site.”

EM’s latest efforts at the Biology Complex have shortened that list, and plans are underway to address more high-risk facilities in the months and years ahead.

“UCOR is proud to bring this project over the finish line and successfully kick off efforts to remove several unneeded facilities at the Y-12 and ORNL sites,” UCOR Oak Ridge Reservation Environmental Cleanup Manager Dan Macias said. “We are using much of the same highly skilled workforce and approaches that allowed us to successfully complete cleanup at the East Tennessee Technology Park four years early and significantly under budget.”

The cleared 18-acre footprint where the former Biology Complex once stood is the planned location for the future Lithium Processing Facility.

“Clearing this site and making it available for development is an important step forward in our modernization plans,” National Nuclear Security Administration (NNSA) Production Office Manager Teresa Robbins said. “Being able to relocate our lithium processing to this new site will greatly benefit site operations and reduce risks associated with the aging structure where operations are currently located.”

EM is working to remove the buildings’ foundations, which is slated for completion this fall. That marks the final step before the land is available for reuse by NNSA.

EM and its contractor UCOR have numerous deactivation projects underway, preparing for the next wave of demolitions at Y-12. Crews are performing work at Alpha-2, Beta-1, the Old Steam Plant, and the Old Criticality Experiment Laboratory. Early preparation activities are also underway at Alpha-4.

The Biology Complex, which dates back to the 1940s, was originally comprised of 11 buildings. It was initially constructed for recovering uranium from process streams, but it was later used for research that led to strides in understanding genetics and the effects of radiation. When operational, the facilities once housed more individuals with doctorates than anywhere in the world.

Jim Harris has been WYSH's News & Sports Director since 2000. In addition to reporting local news, he is the play-by-play voice for Clinton High School football, boys' and girls' basketball and baseball. Catch Jim live weekdays beginning at 6:30 am for live local news, sports, weather and traffic plus the Community Bulletin Board, shenanigans with Ron Meredith and more on the Country Club Morning Show on WYSH. Jim lives in Clinton with his wife Kelly and daughter Carolina, and cats Oliver, Bow and Libby.
Previous Hemp license renewal reminder to growers
Next Smokies bested by Trash Pandas in series opener