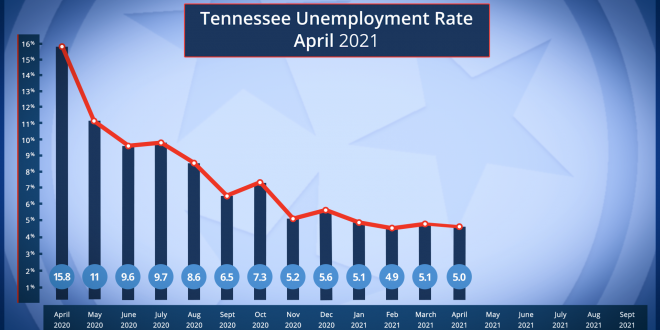 What a difference a year makes in state unemployment

(TDLWD) Tennessee’s statewide unemployment rate for April 2021 decreased by double digits when compared to data from the previous year. In April 2020, the state’s jobless rate reached a record high during the economic disruption caused by the COVID-19 pandemic.
According to data released from the Department of Labor and Workforce Development, Tennessee’s preliminary, seasonally adjusted rate for April is 5%. That’s down 0.1 of a percentage point from March’s revised rate of 5.1%.
Unemployment reached an all-time high in April 2020, at the height of business closures due to the pandemic. The revised rate of 15.8% is 10.8 percentage points higher than where it stands one year later.
Employers across Tennessee added 9,800 jobs between March and April of 2021. The retail trade sector accounted for the largest number of new jobs, while the accommodation/food services and professional/scientific/technical services sectors had the second-and-third-largest gains for the month.
Between April 2020 and April 2021, Tennessee’s economy made a remarkable rebound with the addition of 287,400 jobs. The state’s leisure/hospitality industry put the most people back to work over the last 12 months, followed by the trade/transportation/utilities and manufacturing sectors.

Nationally, seasonally adjusted unemployment increased slightly to 6.1%, up 0.1 of a percentage point from March’s revised rate of 6%. In a year-to-year comparison, the United States rate is down 8.7% from where it was in April 2020.
You can find a complete analysis of Tennessee’s unemployment data for April 2021 here.

Jim Harris has been WYSH's News & Sports Director since 2000. In addition to reporting local news, he is the play-by-play voice for Clinton High School football, boys' and girls' basketball and baseball. Catch Jim live weekdays beginning at 6:20 am for live local news, sports, weather and traffic plus the Community Bulletin Board, shenanigans with Ron Meredith and more on the Country Club Morning Show on WYSH & WQLA. Jim lives in Clinton with his wife Kelly and daughter Carolina, his mother-in-law and cats Lucius and Oliver.
Previous TDOC: Pay raises delayed by COVID to go into effect
Next ORT: Council approves PD, FD drones