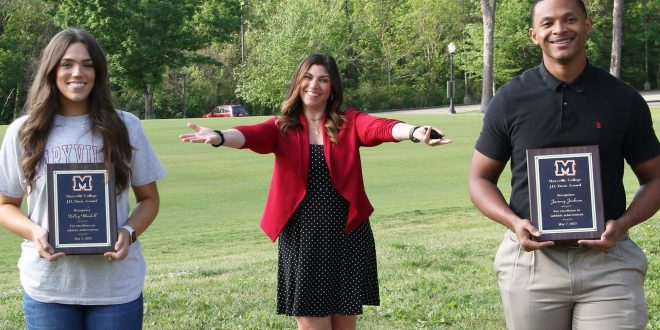 Former Clinton Lady Dragon and Maryville College two-sport standout Kelley Wandell has received the college’s prestigious J.D. Davis Award, which was established in 1979 by the athletic staff, and is an annual award given in memory of the long-time coach and physical education director.

Athletic Director Sarah Quatrocky made the announcment in a video message last week.

Wandell was selected from four finalists, all of whom embodied the spirit of the award, namely by exhibiting “leadership, athletic ability, Christian values, and academic achievement.”

Wandell, as she did at Clinton High School, played and (excelled) both on the volleyball and basketball courts, as well as in the classroom.

In volleyball, she played right-side hitter and recorded 275 kills and 68 blocks in her career, which included one conference championship.

Volleyball coach Kandis Schram commented, “Kelley, I am so very excited for you. I knew five years ago when I recruited you to Maryville College you were going to do amazing things, and boy, was I right. You have just knocked it out of the park. You make us so proud in everything you do, if it’s in the dorm, or on the athletic facility, it’s just amazing what you have brought to Maryville College. Your legacy is strong and will live forever.”

On the basketball court, Wandell was a dominant post player, averaging just under 6.8 points per game but really making her presence felt on the glass, as she also averaged 6.5 rebounds per game, grabbing 594 for her career, and helped the Lady Scots win a conference title in March.

Basketball coach Darrin Travillian said, “You are absolutely the epitome of everything the JD David Award strives to acknowledge. From your work on the hardwood, to what you’ve done in the classroom, to the great things you have done for our campus and greater community, I cannot imagine a more deserving candidate and and I have been honored to be your coach.”

Wandell herself, at the end of the award announcement, first thanked her coaches, teammates and teachers, but then thanked her biggest supporters, her parents, Shannon and Tracy Wandell: “My mom and my dad have given me a lot over the years. I wouldn’t have been able to receive anything. Their guidance has pushed and guided me throughout my college career and I know it will continue to guide me throughout my life, and I am just so thankful for them, and I’m thankful for everyone that has supported me, and this award.”

Kelley graduated with a degree in political science and a double minor in psychology and criminal justice.

Congratulations to Kelley Wandell, who is truly a special young woman who represents her hometown of Clinton and her now-alma mater Maryville College at the highest level.

(More on the JD Davis Award, from Maryville College) The J.D. Davis award was established in 1979 by the athletic staff. It is an annual award given in memory of a long-time coach and physical education director.

In the late 1920’s, J.D. Davis was a superior athlete on the Maryville College campus. He excelled in three sports- football, basketball, and baseball- receiving 12 letters and numerous honors for his achievement. After a short stint in professional baseball, J.D. returned to his alma mater and began his dedicated service as a coach and teacher.

J.D. was a positive influence in the lives of hundreds of young people on the MC campus. He coached football, wrestling, and track and also served as the chairman of the physical education department. J.D. retired in 1971 after 40 years of service.

This award seeks to honor senior student-athletes who exhibit leadership, athletic ability, Christian values, and academic achievement. These are all characteristics for which J.D. Davis is remembered.

To watch the complete video announcement of Kelley Wandell as the 2021 Female JD Davis Award winner, follow this link.

Jim Harris has been WYSH's News & Sports Director since 2000. In addition to reporting local news, he is the play-by-play voice for Clinton High School football, boys' and girls' basketball and baseball. Catch Jim live weekdays beginning at 6:20 am for live local news, sports, weather and traffic plus the Community Bulletin Board, shenanigans with Ron Meredith and more on the Country Club Morning Show on WYSH & WQLA. Jim lives in Clinton with his wife Kelly and daughter Carolina, his mother-in-law and cats Lucius and Oliver.
Previous Wednesday is National School Nurse Day
Next CPD busy with four wrecks Tuesday morning