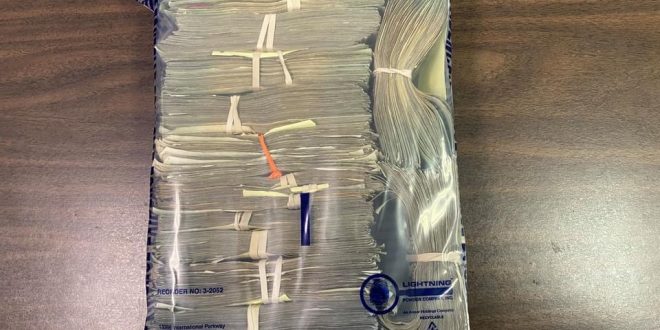 No task force? No problem, as CCSO seizes cash, heroin

A lieutenant with the Campbell County Sheriff’s Office initiated a traffic stop last week that led to the seizure of some $80,000 in cash.

The CCSO says that on Monday, April 5th, Lt. Travis Bostic pulled a man over on Highway 25 just outside of Jacksboro four a routine traffic violation. While speaking to the driver, Bostic spotted two plastic bags in the man’s pocket, which the suspect identified as heroin. Later, it was determined that the combined weight of the heroin came in at around 32 grams. The driver consented to a search of his vehicle, which is when the cash was found. The driver, according to the report, admitted the $80,000 was the proceeds from illegal drug sales. Deputies seized the drugs, the cash and the man’s vehicle.

Following the traffic stop, deputies obtained a warrant to search the suspect’s home and reported finding additional drugs and cash, as well as a Honda side-by-side ATV that had been reported stolen in Anderson County.

Officials are not releasing the man’s identity as the investigation continues. We will update you as developments warrant.

In a the press release, Sheriff Robbie Goins wrote, “Last week, I announced that the Campbell County Sheriff’s Office had a plan to continue fighting the drug epidemic in our county following the closure of the 8th Judicial Drug Task Force. This traffic stop and seizure is proof that my department is committed to the promise I made to keep fighting against drug dealers. I will re-iterate to the people who are selling drugs or bringing them into Campbell County, big or small, we will not stop our efforts to charge and arrest those breaking the law. You are not welcome in Campbell County.”

Jim Harris has been WYSH's News & Sports Director since 2000. In addition to reporting local news, he is the play-by-play voice for Clinton High School football, boys' and girls' basketball and baseball. Catch Jim live weekdays beginning at 6:20 am for live local news, sports, weather and traffic plus the Community Bulletin Board, shenanigans with Ron Meredith and more on the Country Club Morning Show on WYSH & WQLA. Jim lives in Clinton with his wife Kelly and daughter Carolina, his mother-in-law and cats Lucius and Oliver.
Previous Library Board meeting Thursday
Next Ex-SRO indicted on solicitation charges