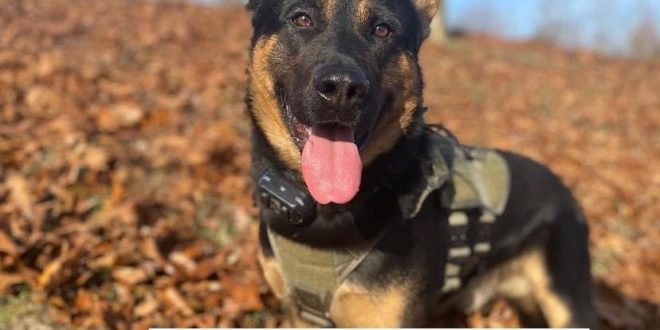 Sunday proved to be eventful for members of an Oak Ridge church after a wanted fugitive fleeing from a traffic stop at Tulane and the Turnpike decided to use their building as a hiding place.

The Anderson County Sheriff’s Department says that they were contacted by Oak Ridge Police at around 11:15 am Sunday, who requested that a K-9 unit be brought in to track down the suspect, who entered First United Methodist Church in between the 10 am and and 11 am services.

The 11 am service and Worship on the Lawn at 1 pm were both canceled as the building was still being searched and cleared.

ACSO Sgt. Jon Acker and his K9 partner Baron responded to the church to search for the man, who was wanted in Ohio and was considered armed and dangerous. As the ACSO points out, Oak Ridge’s First United Methodist Church is a large building with many places to hide, but after about two hours of searching, Baron alerted on a bathroom closet. When the door was opened, the supect immediately surrendered and was taken into custody without further incident.

“I am very grateful to be working this dog and blessed to have some awesome people working with us and who have helped us along the way” stated Sgt. Acker.
“Today was a great example of the exceptional professionals we have working in law enforcement. The team at ORPD was phenomenal today and worked great with our agency in finding this wanted individual. The staff at First United Methodist was instrumental in this as well. Job well done by everyone” concluded Sheriff Russell Barker.

As soon as the arrestee’s name is made public, we will pass it along to you.

No one was hurt during Sunday’s episode.

Jim Harris has been WYSH's News & Sports Director since 2000. In addition to reporting local news, he is the play-by-play voice for Clinton High School football, boys' and girls' basketball and baseball. Catch Jim live weekdays beginning at 6:20 am for live local news, sports, weather and traffic plus the Community Bulletin Board, shenanigans with Ron Meredith and more on the Country Club Morning Show on WYSH & WQLA. Jim lives in Clinton with his wife Kelly and daughter Carolina, his mother-in-law and cats Lucius and Oliver.
Previous Oak Ridge Recreation & Parks 2021 Summer Camp registration opens
Next Smokies to host third and final job fair this weekend