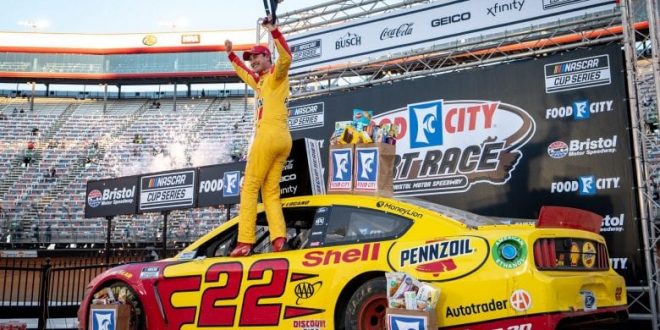 Leading the final 61 laps in the face of a determined charge by Denny Hamlin, Logano won the rain-delayed Food City Dirt Race in overtime at Bristol Motor Speedway, the first dirt-track race for the NASCAR Cup Series since 1970.

But there won’t be that long a gap in the future, given BMS executive and general manager Jerry Caldwell announced during the race that NASCAR will return to the Bristol dirt in 2022.

Logano grabbed the lead from Daniel Suarez on Lap 193 of a scheduled 250 and held it the rest of the way through a caution for the second stage break and a late yellow that sent the race three laps beyond the prescribed distance.

On the final restart on Lap 252, Logano pulled away, as Hamlin tried and failed to find grip in the outside lane and fell to third behind runner-up Ricky Stenhouse Jr. Logano’s winning margin over Stenhouse was .554 seconds.

Logano is the seventh consecutive different winner in seven races this season.

For a complete recap of Monday’s race, follow this link.

Jim Harris has been WYSH's News & Sports Director since 2000. In addition to reporting local news, he is the play-by-play voice for Clinton High School football, boys' and girls' basketball and baseball. Catch Jim live weekdays beginning at 6:20 am for live local news, sports, weather and traffic plus the Community Bulletin Board, shenanigans with Ron Meredith and more on the Country Club Morning Show on WYSH & WQLA. Jim lives in Clinton with his wife Kelly and daughter Carolina, his mother-in-law and cats Lucius and Oliver.
Previous CWTS: Truex surprises, dominates in the dirt
Next Bennie L. Cox, 92, of Clinton