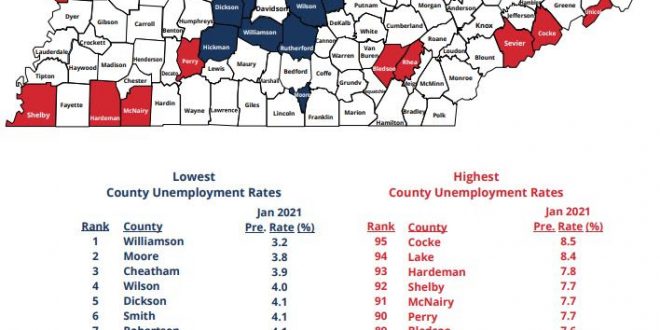 Most of Tennessee’s 95 counties started 2021 with lower unemployment numbers, according to data released by the Department of Labor and Workforce Development.
Seventy-eight counties began the new year with a decrease in unemployment. The jobless rate remained the same in seven counties and increased in ten counties.
Rates in 24 counties came in under 5% for the month. The remaining counties, 71 out of the 95, have rates higher than 5%, but less than 10%.
Williamson County recorded the state’s lowest unemployment rate. The new rate of 3.2% is down 0.6 of a percentage point from the December 2020 statistic.

Moore County followed Williamson with a rate of 3.8%, down 0.3 of a percentage point from December, while Cheatham County had the third-lowest rate at 3.9%, a decrease from 4.4%

Cocke County had Tennessee’s highest unemployment in January increasing by two full percentage points in January to 8.5% from December’s 6.5%.

In Anderson County, the unemployment rate decreased by three-tenths of a point, falling from 5.3% in December to 5.0 % in the first month of 2021.

Campbell County’s jobless rate remained steady at 6.3% in January, as did Morgan County at 6.2%.

Jim Harris has been WYSH's News & Sports Director since 2000. In addition to reporting local news, he is the play-by-play voice for Clinton High School football, boys' and girls' basketball and baseball. Catch Jim live weekdays beginning at 6:20 am for live local news, sports, weather and traffic plus the Community Bulletin Board, shenanigans with Ron Meredith and more on the Country Club Morning Show on WYSH & WQLA. Jim lives in Clinton with his wife Kelly and daughter Carolina, his mother-in-law and cats Lucius and Oliver.
Previous UT-Battelle awards $200K-plus in STEM grants
Next TWRA seeking comments on 2022 fishing regulations