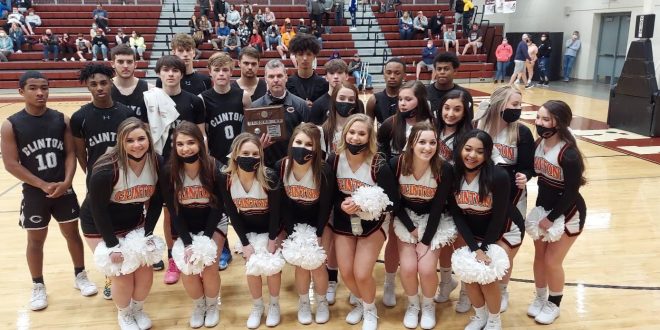 Clinton players, coaches and cheerleaders pose for a photo after receiving the runner-up trophy at the 2021 D3AAA tournament. (Photo by Shari Bryant)

D3AAA Boys’ Championship Game: Oak Ridge 76 Clinton 61…Oak Ridge backed up its regular-season District championship with a tournament title on Tuesday, playing at home against Clinton. Stafford Shanklin led a balanced Oak Ridge attack with 20 points and Tournament MVP Kell Slater added 18 to lift the Wildcats. Oak Ridge jumped out to double-digit leads twice—once in the second quarter and again in the third—but the Dragons were able to get back within shouting distance both times. The fourth quarter, though, belonged to Oak Ridge as the 24-4 ‘Cats pulled away down the stretch.

The Dragons, who never were able to find a rhythm offensively, were led by Lane Harrison and Trace Thackerson, who each scored 15 points. Clinton fell to 16-5 with the loss, and will host Farragut on Saturday night in the first round of the Region 2AAA Tournament. The complete first-round schedule is farther down this page.

Thackerson, Harrison and Jackson Garner were named to the All-Tournament Team, as were Oak Ridge’s Shanklin, Jonathan Stewart and Jonathan Milloway.

On Monday, Clinton’s Sarah Burton and Naiyah Sanders were named to the All-Tournament team on the girls’ side.

D3AAA Boys’ Consolation Game: Central 74 Karns 59…Central pulled away from 8th-seeded Karns in the second half to win in Fountain City.

(The first two rounds of the region tournament are single-elimination.

Jim Harris has been WYSH's News & Sports Director since 2000. In addition to reporting local news, he is the play-by-play voice for Clinton High School football, boys' and girls' basketball and baseball. Catch Jim live weekdays beginning at 6:20 am for live local news, sports, weather and traffic plus the Community Bulletin Board, shenanigans with Ron Meredith and more on the Country Club Morning Show on WYSH & WQLA. Jim lives in Clinton with his wife Kelly and daughter Carolina, his mother-in-law and cats Lucius and Oliver.
Previous State could lift nursing home visitor restrictions within days
Next Harrison Thomas White, 25, of Knoxville