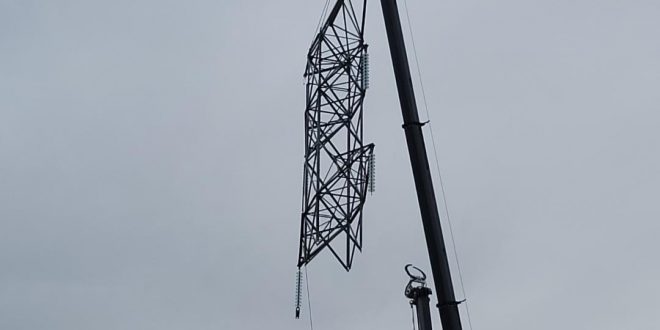 The intersection of South Illinois Avenue and Union Valley Road was reopened late Sunday night after having been closed since Friday afternoon after a truck crashed into a Tennessee Valley Authority (TVA) transmission tower, causing the highway to be impassable.

A preliminary report from the THP said 28-year-old Dustin Elliott of Mobile, Alabama, was driving a white 2015 Chevrolet Silverado pickup truck north on South Illinois Avenue (State Route 62) when he went off the right side of the road and hit the Tennessee Valley Authority transmission tower. The tower was damaged, knocked over, and leaning over the road.

Other utility poles were damaged because of the tower collapse, THP said.

While the roadway has been reopened, drivers should still be cautious and prepared for delays and detours around equipment while crews continue to work off the road.

As of late Sunday, power remained out for just a small southeast portion of the City near the site of the crash, including the University of Tennessee Arboretum.

The crash caused widespread outages across the city, as well as in the surrounding area. Electric crews were able to get power restored for a majority of Oak Ridge within a few hours.

Elliot was injured in the crash, according to the THP, and will be charged for driving with a suspended driver’s license, failure to use due care, and a seat belt violation. He was not wearing a seat belt, THP said. Elliot had two passengers, also of Mobile, Alabama, and they were both injured, according to the report. The passengers were also not wearing seat belts, the report said.

Jim Harris has been WYSH's News & Sports Director since 2000. In addition to reporting local news, he is the play-by-play voice for Clinton High School football, boys' and girls' basketball and baseball. Catch Jim live weekdays beginning at 6:20 am for live local news, sports, weather and traffic plus the Community Bulletin Board, shenanigans with Ron Meredith and more on the Country Club Morning Show on WYSH & WQLA. Jim lives in Clinton with his wife Kelly and daughter Carolina, his mother-in-law and cats Lucius and Oliver.
Previous Trent Junior Rose, age 83 of Andersonville
Next Deadline Friday to apply for OR Boards, Committees