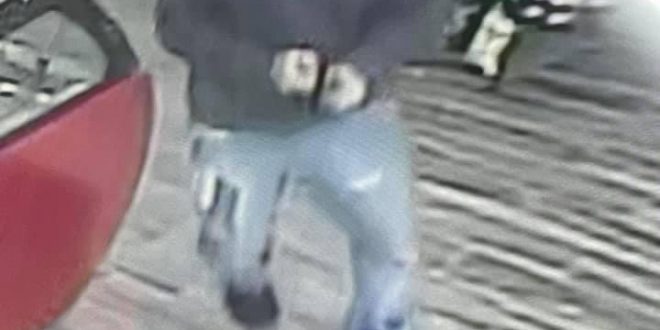 Photo of suspect in January 9, 2021 theft in Caryville (Caryville PD)

Caryville Police took to Facebook Thursday as they seek information on the suspects who stole dozens of cartons of cigarettes from a store last weekend.

The Caryville Police Department says that officers were called to the Shell gas station at 204 Howard Baker Highway at around 5:45 am on Saturday, January 9th on a report of a break-in.

Officers quickly determined that the suspects had gained entry to the business by smashing a front window with a large rock. Once inside, investigators say that the suspect or suspects stole over 150 cartons of cigarettes and fled in a dark-colored car.

The business owners are offering a $1000 reward for information that leads to the arrest and prosecution of those responsible. The Caryville PD shared photographs from store security footage of both a suspect and a vehicle, and you can also see some of those photos on our website.

Jim Harris has been WYSH's News & Sports Director since 2000. In addition to reporting local news, he is the play-by-play voice for Clinton High School football, boys' and girls' basketball and baseball. Catch Jim live weekdays beginning at 6:20 am for live local news, sports, weather and traffic plus the Community Bulletin Board, shenanigans with Ron Meredith and more on the Country Club Morning Show on WYSH & WQLA. Jim lives in Clinton with his wife Kelly and daughter Carolina, his mother-in-law and cats Lucius and Oliver.
Previous DOE announces prescribed burns on OR Reservation
Next Unemployment claims climb again in Tennessee