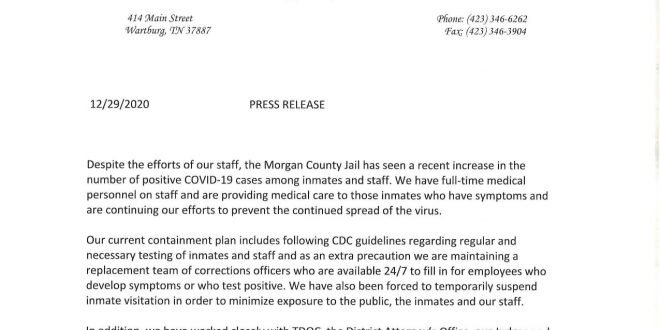 The Morgan County Sheriff’s Office says that it has seen a recent increase in the number of positive COVID-19 tests among both inmates and staff at the County Jail.

In an announcement Tuesday, Sheriff Wayne Potter said that the jail’s full-time medical personnel are providing medical care to afflicted inmates and that the jail staff is continuing its efforts to prevent additional spread. Potter says that the current containment plan follows CDC guidelines regarding testing of inmates and staff, and said that as an added precaution, the Sheriff’s Office is maintaining a replacement team of corrections officers who will be available 24 hours a day, seven days a week to fill in for any employee who develops symptoms or tests positive for the virus.

In addition, to further mitigate the spread of germs to the public, the inmates and jail staff, inmate visitation has been temporarily suspended. The Sheriff says that his agency has worked closely with ssee Department of Correction, the DA’s Office and local judges to separate and secure those inmates who test positive from those who have not, while also still processing and housing people arrested during this time.

Jim Harris has been WYSH's News & Sports Director since 2000. In addition to reporting local news, he is the play-by-play voice for Clinton High School football, boys' and girls' basketball and baseball. Catch Jim live weekdays beginning at 6:20 am for live local news, sports, weather and traffic plus the Community Bulletin Board, shenanigans with Ron Meredith and more on the Country Club Morning Show on WYSH & WQLA. Jim lives in Clinton with his wife Kelly and daughter Carolina, his mother-in-law and cats Lucius and Oliver.
Previous Lady Vols basketball pauses activities after positive COVID test
Next State reports third-highest number of COVID deaths in single day